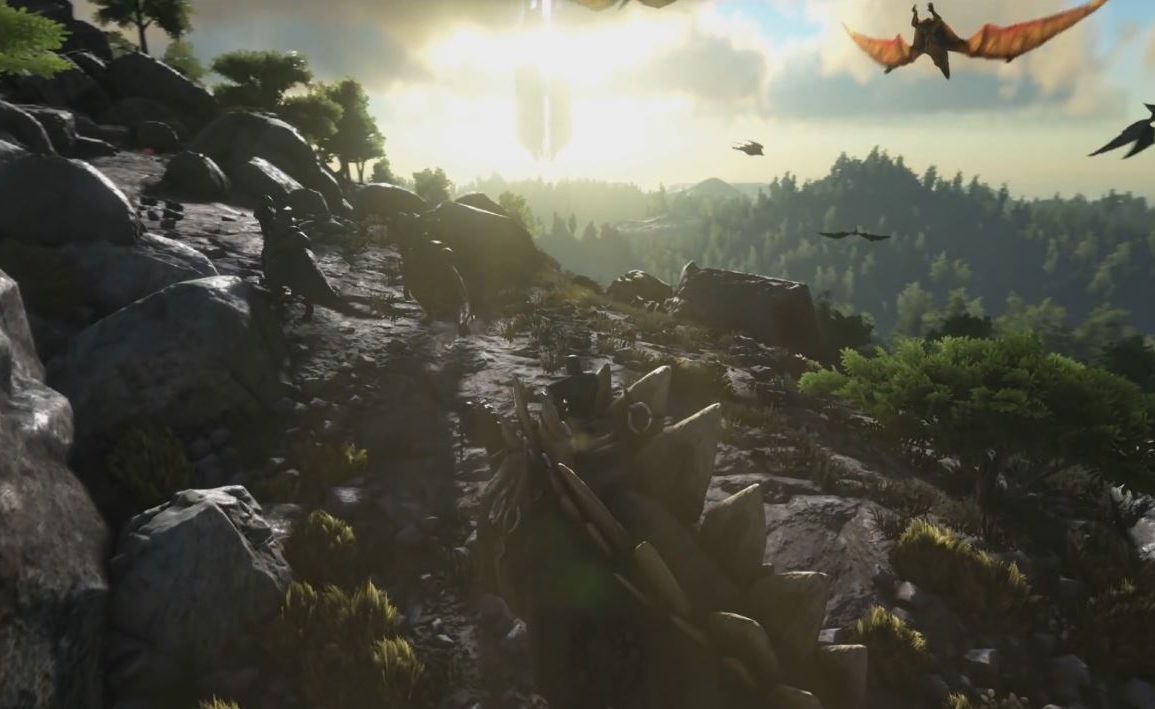 There are a lot of Oculus Rift games available for people to play. Although they might be fun and immersive in terms of virtual reality, they do suffer from a lack of content, length, and visual appeal.

As time goes on, we see more and more games being developed with VR in mind,

UPDATE: WAS one of them. Unfortunately, developers have gradually decided not to support it anymore.

That makes most setup guides for Ark: Survival Evolved obsolete. I thought about releasing my own, but seeing how badly it performs with the right setup, I am not going to give you false hope.

Instead, I better steer you towards a separate game called Ark Park. I have played it myself, but I didn’t really find it as special as the original one.

You might find it more suited for your taste, so I’ll let you decide.

But for now, the original Ark: Survival Evolved is just dead. You can see it from here, here, and here.

I will let you know if something changes.

In the meantime, you can read an article that I wrote in 2015 for nostalgia’s sake:

You start the game with nothing. You wake up naked on a beach while having a mysterious gem-like thing on your left arm. Even though the game is quite similar to other survival games like Rust, DayZ, or H1Z1, it does feature a lot more lore, and the story behind it.

As you progress in the game, you will find different things that explain how you got to where you are, and what is happening around you.

There is a progression in the game. When you level up, you get skill points which you can spend on “knowledge” of a particular area.

For example, you can become more agile and fast, or you can be more spacious and have an ability to carry more weight on yourself (which means, by the way, that the game inventory will be weight-based).

All the stuff that you will see in the game will be available only through crafting or from supply drops. But, to craft anything you first need to find some blueprints, which are scattered all around the map. The better the item, the more difficult it will be to find it.

See also: Oculus Rift and MMO Games – What’s up With That?

We do not know the exact timeline in which ARK: Survival Evolved is in, but what we do know is that you are going to be using spears and bows, as well as sniper rifles, pistols, and machine guns later on in the game.

There will even be an attachment system for your weapon, so getting a better scope might become a goal later on. 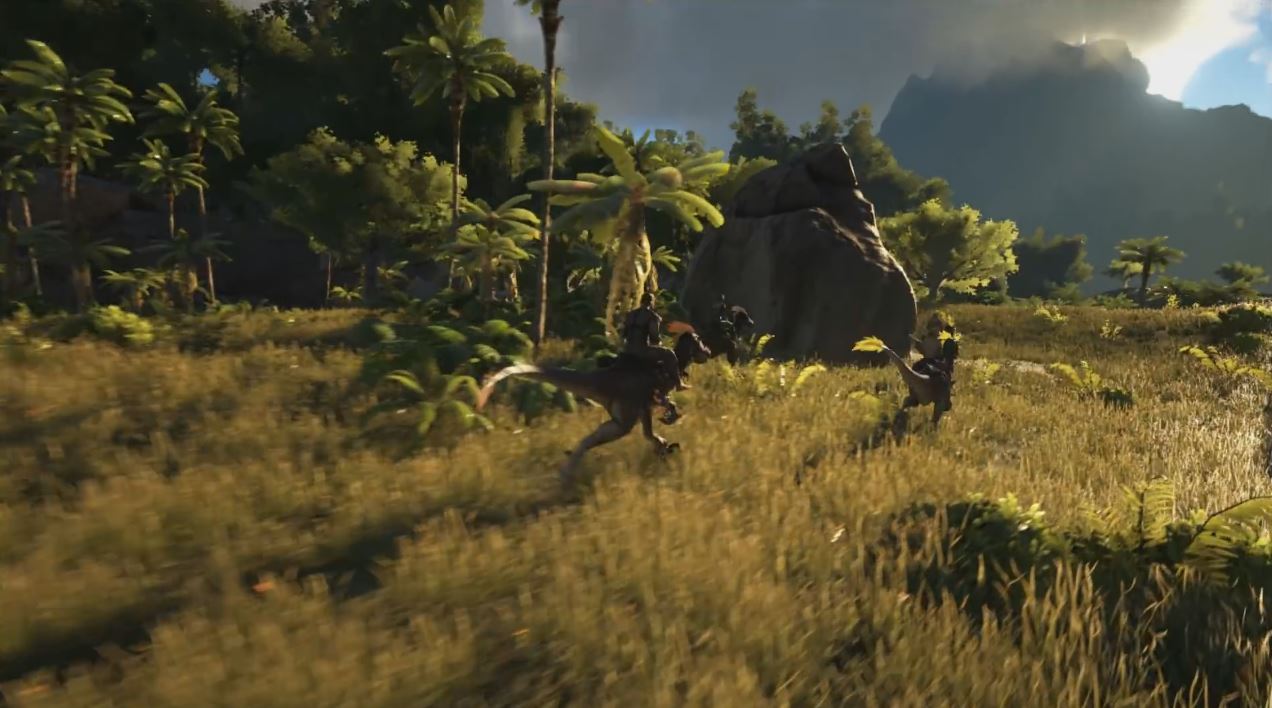 Having all kinds of dinosaurs in this world is essential to the ARK gameplay. Some dinosaurs will be friendly and just passing through. Others might be hostile. But as far as we know, you can mount different dinosaurs and use their abilities in combat.

For example, if you are going to mount a velociraptor, speed and attack might be better than on huge dinosaurs like sauropods.

But sauropods might be more useful with carrying your equipment, as well as mounting additional players (who, as a matter of fact, can use their weapons while riding them). At this current game stage, dinosaurs will not be customizable in terms of their armor or weapon attachments, but later on, in the game, something like that might be implemented.

The size of the ARK: Survival Evolved map is roughly around 48km², which is around the size of Far Cry 2 or The Elder Scrolls: Oblivion. But the surface of the map is not the only place you can explore. There are countless cave systems for you to visit which may even intertwine at some point with other caves.

There are even some places you can get to only if you use flying creatures. Mountains and high places are not off the radar for exploring, so there will literally be 100’s hours of gameplay for you, even in alpha access. (which is on June 2nd). 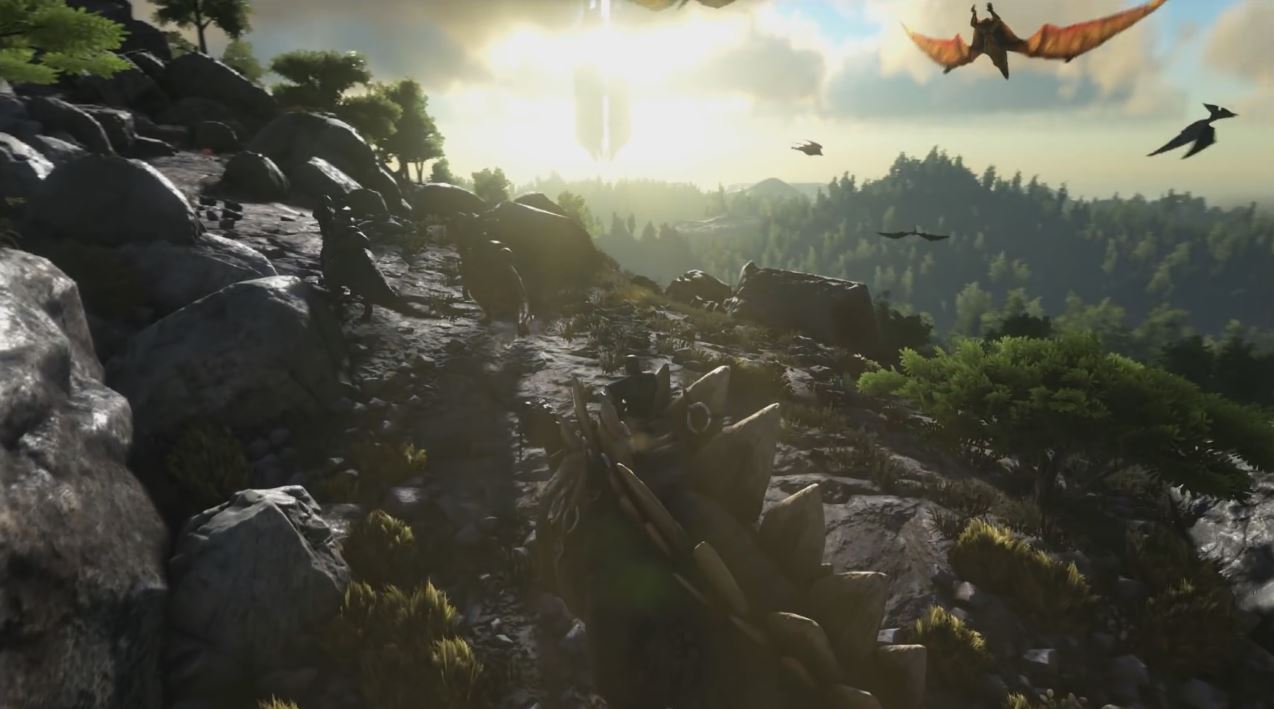 ARK: Survival Evolved is mostly centered around multiplayer. You can have a single-player mode, but the balance system is going to be a bit different, since ARK focuses deeply on the team play aspect, and exploring all the places alone might become a challenge if not taken care of in terms of balancing.

What I really liked about the game is that you can have quite a lot of fun with it.

Character customization does not shy away from silliness, you can literally make yourself look like a fat dwarf with huge arms and tiny legs, like in Reign of Kings.

If you want to mess around with other people, you can capture and put them in a cage while force-feeding players with some bits of food. Or you can give them a death sentence by pushing players off the cliff or dragging them in the ocean.

Role-playing is always fun to watch and play, and if we add Oculus Rift and VoIP (which it will have) to the occasion, immersion is easily attained. 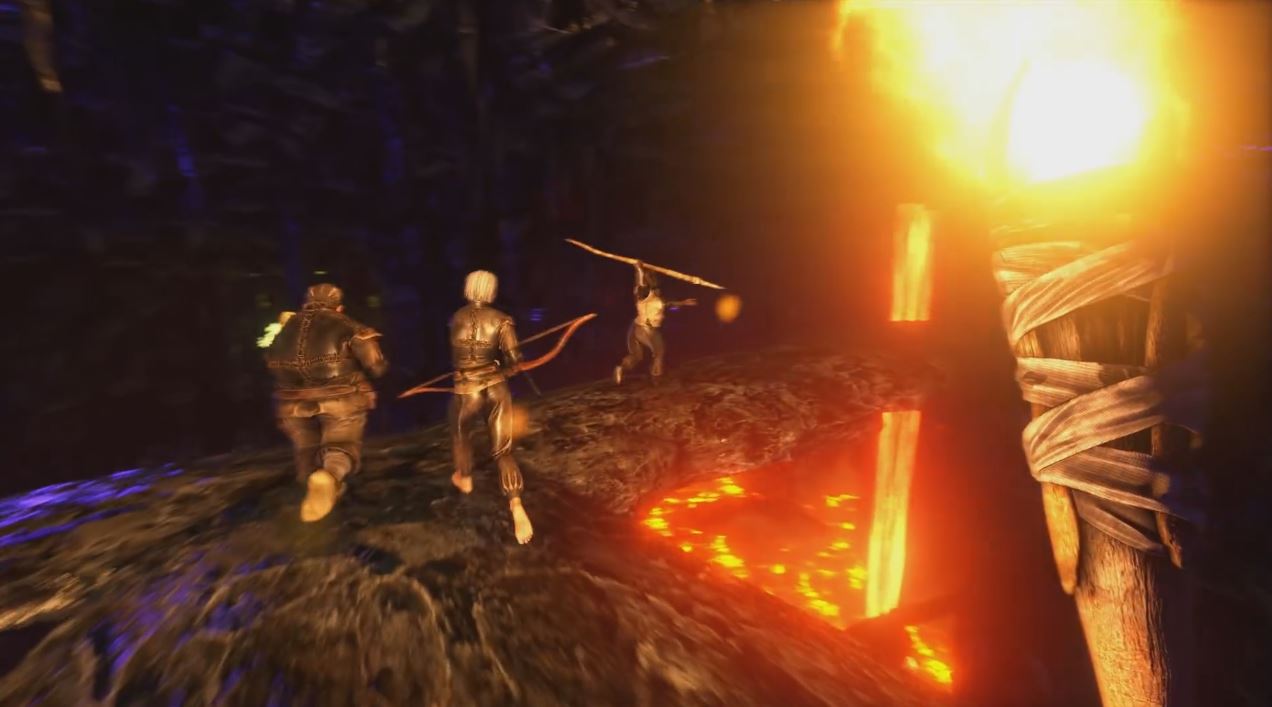 Apart from exploring different places, the building will be important. If you do not have a shelter by the time you log off, you might find yourself swimming with the fishes the next time you log in.

It means that if you log out, the character in-game will not disappear, but will fall asleep in the exact location, so other players might easily chain you and drag you away.

If you don’t like finding food, you can start farming in your home area.

To speed things up, you can invite your friends to the party. But in order to get together, you must first find each other. For that, you might use different colored flare guns, or build a compass that shows you an approximate location you are in. 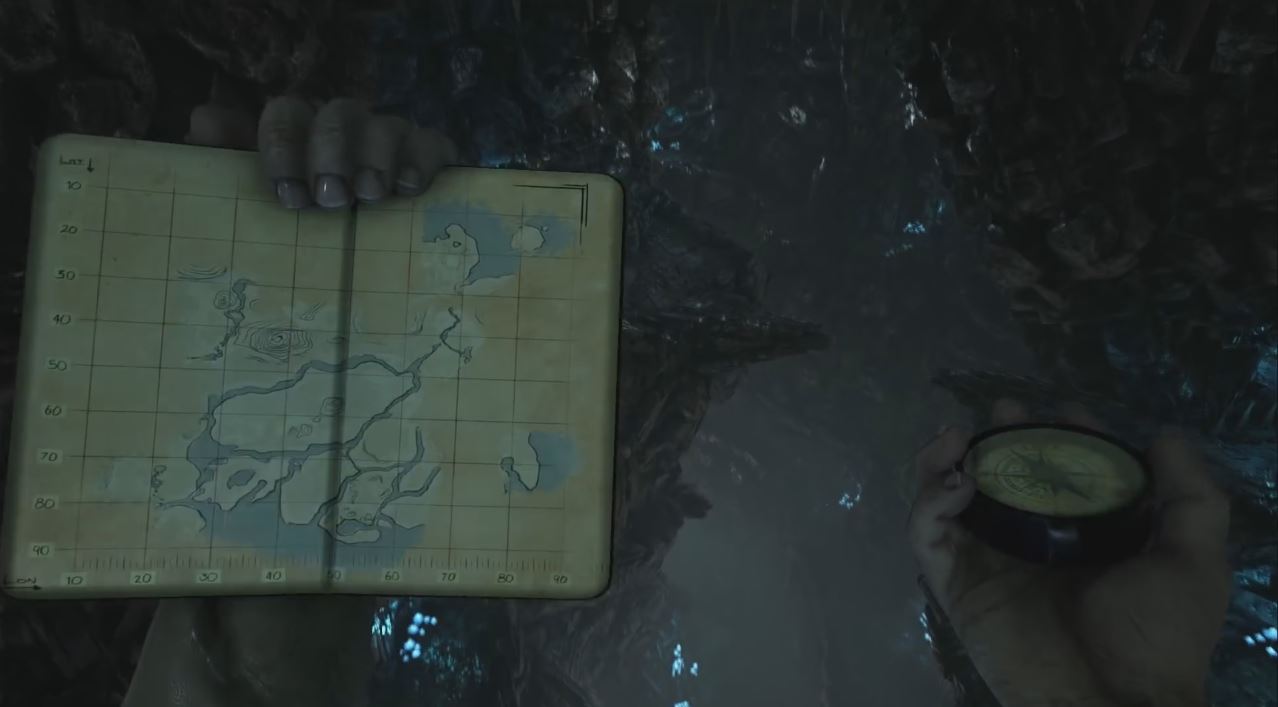 With friends, you can actually do a lot of stuff. If you are well equipped, summoning boss creatures for better loot will be an option. If you want, you can mess with other players and PvP them with your mounted dinosaurs.

Something I am personally looking forward to is exploring caves with others. So even though you can play ARK: Survival Evolved in single-player, the multiplayer is essentially something that sells this game.

This game has been on a development cycle for around 7 months, starting from October last year (2014). I was actually quite surprised as to how much they have accomplished over such a period of time.

Although developers are working together for the first time, it isn’t their first serious project on their belt. Most of the game designers and programmers of ARK have years of experience, which helps them to focus on stuff that matters most and leave other graphical problems for future fixing.

As a result, it might not be a surprise if we see some animation bugs while in Alpha Access, as it, of course, should be with Alpha release.

ARK: Survival Evolved uses Unreal Engine 4 and is one of the first games that have official mod support on UE4, so if players want, they can have quite a lot of fun messing with the game through a Steam workshop.

In terms of anti-cheat measures, however, they are really focusing on preventing any kind of hacks by implementing a server system that always checks if everything is valid. So it will be quite hard to use hardcore cheats in this game.

For lighter hacks, like rendering cheats, they use anti-cheats through the Steam system. 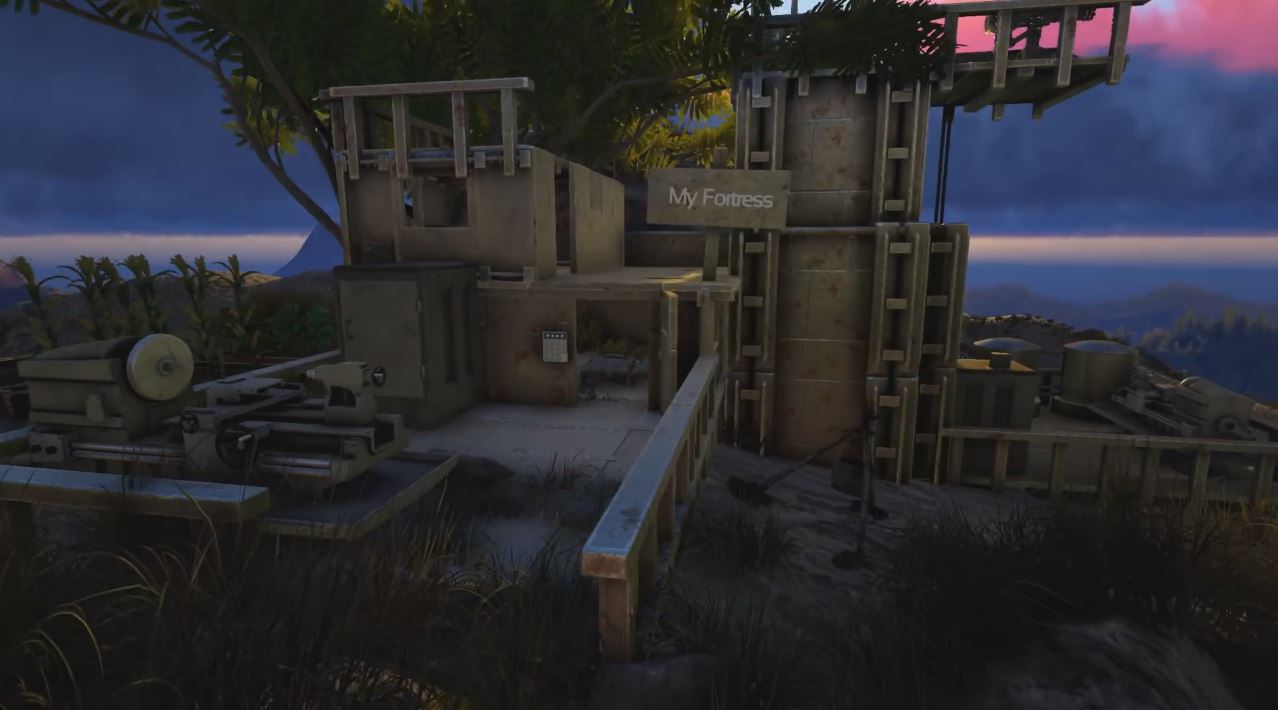 Developers are really trying to focus on Virtual Reality as much as on non-VR mode. Having a pleasant experience is always a top priority, and because of that, some changes had to be made.

For example, this whole game is going to be in the first person (Update: 3rd person also available while running). Third-person will only be available if you mount a creature. The reason behind this is to be as realistic as possible.

Also, UI is minimized to help you immerse yourself more easily. Especially if you equip an Oculus Rift, having a first-person mode and little to no UI can be quite helpful.

A FOV is not yet determined for this game, since they are focusing on both Oculus Rift mode and non-VR mode, so to find that golden middle and what kind of FOV slider to implement, will be decided after the community feedback.

Their goal is to have 100 players on one server. Even though the game looks visually mind-blowing, there is something that might turn some people off. And that is 30 FPS.

Developers are aiming to get 30 FPS on all specs, so even if you have a beast computer, you can’t have everything turned on ULTRA, and still, get 60 FPS. It is possible only through turning down some quality options since the optimization is not something they are focusing on at the moment.

That does make me worry though because if you want to get a good VR experience, having at least 60 FPS is crucial. Lower than that and you get nausea and motion sickness.

Once the game is top-notch on PC, they will release it on consoles along with the Project Morpheus support, which comes out in Q2 2016.

ARK: Survival Evolved will be released on June 2nd for Alpha Access. They have a plan to implement a lot of additional stuff further down the line by adding more customization and gameplay. The final version of the game will be released in summer 2016.

There won’t be any kind of microtransactions in the game. You buy it once for $25, and everything is yours.

So if you want to get this game, I advise you to get it soon, as the final price will be higher.

Big thanks to Twitch streamer Lirik for the information he got during the interview with the Creative Director of ARK: Survival Evolved.


Have something to add? Feel free to comment below: