How Much Does Oculus Rift Cost – CV1 More Expensive?

How much does Oculus Rift CV1 cost? Are the $1,500 rumors true? Every time when something is expected to be released, all kinds of price speculations arise from who knows where. You just need 1 major news site to give you a tiny speculation, and all hell breaks loose.

It’s the same with a release date. One of the bigger fishes gave us a rumored November shipping date a few months ago, and the next thing you know, people are addressing it as a confirmed release date.

What We Previously Thought About the Price

Before all this interesting chaos about the $1,500 price (PC included), everyone had their mind on the price range of $200 – $400. That speculation started when Eurogamer did an interview with Nate Mitchell and Palmer Luckey. When asked about the price, they answered the following:

As for the eventual price: the consumer version should come in similar to what DK2 costs now. “We want to stay in that $200-$400 price range,” he states. “That could slide in either direction depending on scale, pre-orders, the components we end up using, business negotiations…”

This was 8 months ago. So it is completely normal for them to change the cost of a consumer version of the Oculus Rift for the higher, especially when they have done some major changes to hardware. And if we are not mistaken, changes have been made. That can also be speculated due to their release date change from the end of 2015 to Q1 2016.

What Are the Latest Price Rumors

Re/Code had an opportunity to talk to VR CEO Brendan Iribe a few days ago at Code Conference in Rancho Palos Verdes, Calif. They managed to ask quite a lot of questions regarding the safety of Oculus Rift, the usage of it, and what price can we expect for CV1 next year. 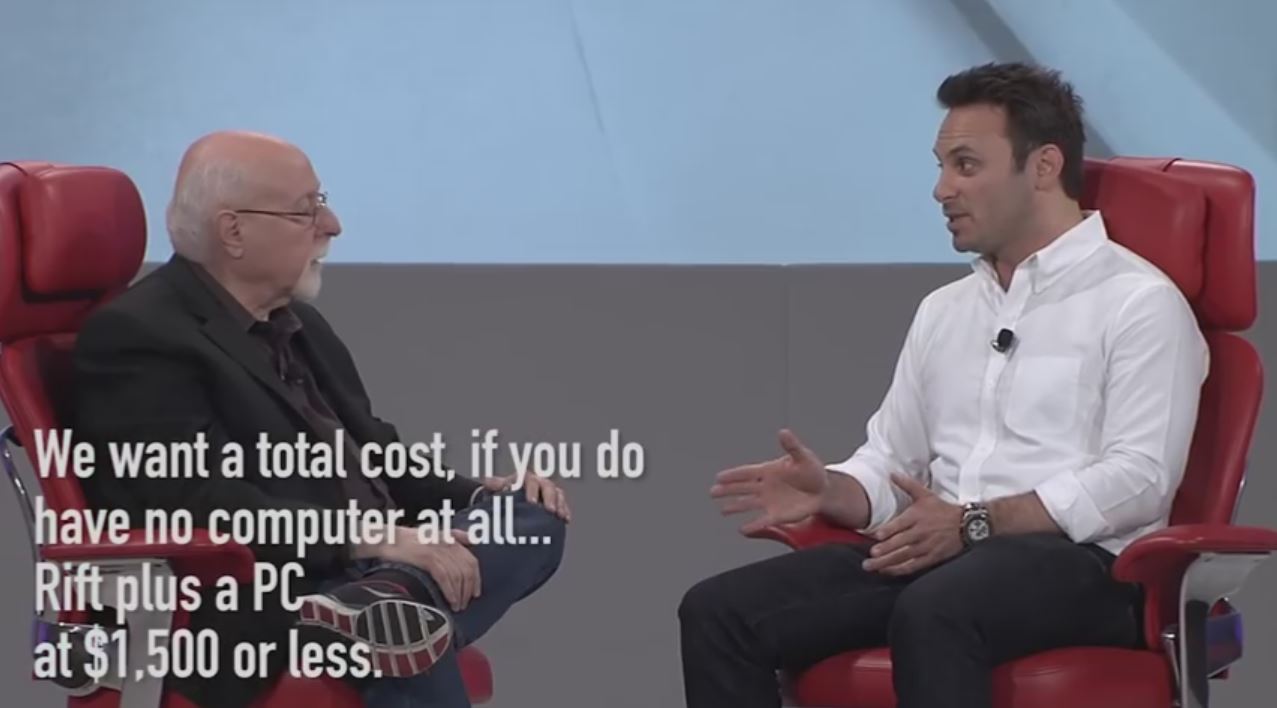 Iribe said that cost of the Oculus Rift CV1 is $1,500 (PC included). It is risky to say things like this because some people will take it as a price of Oculus Rift only (yes, there are these kinds of people). Thanks to the recommended specs announcement from Oculus themselves, we do know that you need to have a high-end computer to get a good VR performance. GTX 970 (which was recommended) already costs around $350, and we add other hardware components, it can easily pile up to $1,000 mark range. That leaves us with $500 for Oculus Rift CV1.

To be honest, saying these numbers is silly. We do not know what kind of computer Brendan meant, so buying a more expensive component for your computer might lower the price of CV1 by $100 or $200. Iribe should have also added the cost of a car that needs to be bought for driving to the nearest shop that sells Oculus Rift, and the price of a chair that needs to be acquired to get the optimal comfort for VR. Next thing you know, everyone is announcing the price of CV1 to be $14,000.

However, if to be serious, I do think that price of the HMD we get in Q1 2016 is going to be higher than for DK2. Mainly because of the improved specs, integrated headphones, and due to included controller that we probably are going to get.

No one knows the official price yet, but something tells me, upcoming months will be filled with interesting details about the CV1.