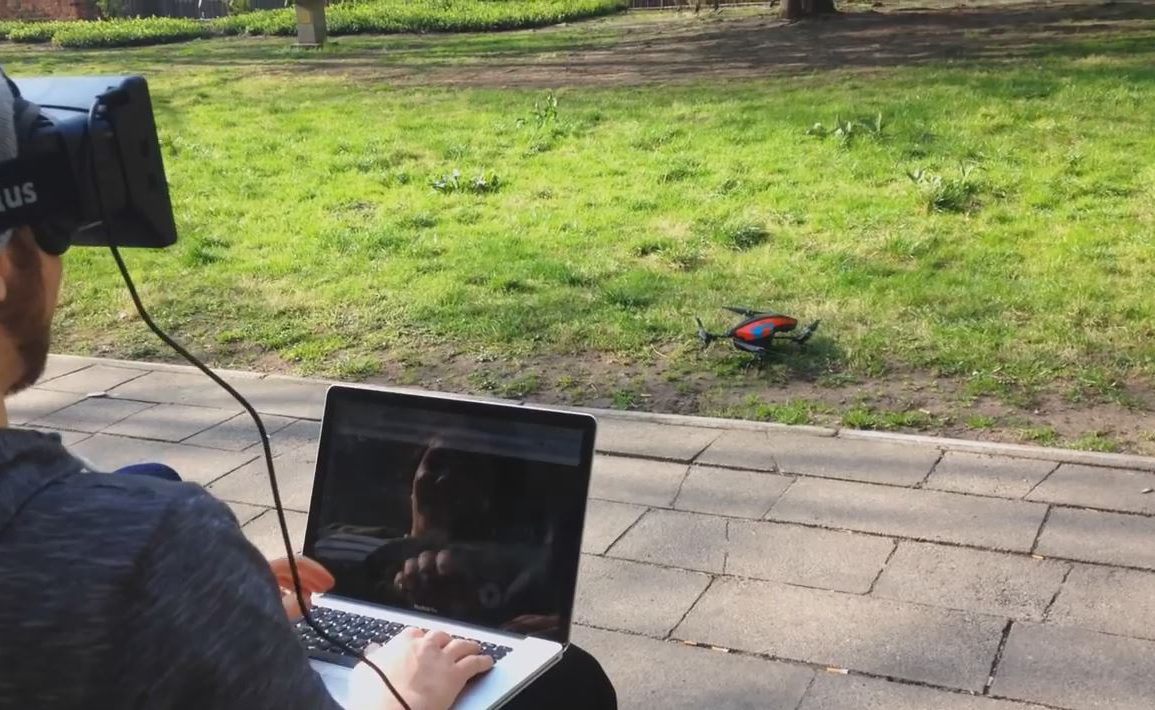 When new technology comes out, it is not uncommon for people to invent new stuff by adding different accessories to the device, changing its work mechanics, gluing it to something, or testing it out in various ways to see how it holds up. I mean, iPhone 6 bend test getting 65 million Youtube views in just 7 months is not a coincidence. People love to experiment with things, and adding Oculus Rift to the test collection is just bound to happen.

One of the new innovative ways to use the Rift headset is by gluing the camera to the RC quadcopter, convert the signal from the receiver to a webcam video, and feed it to your rift. Although people have tried using the HMD for various FPV devices like RC moving cars, putting Oculus Rift and drones together has been a much more thrilling experience for testers. 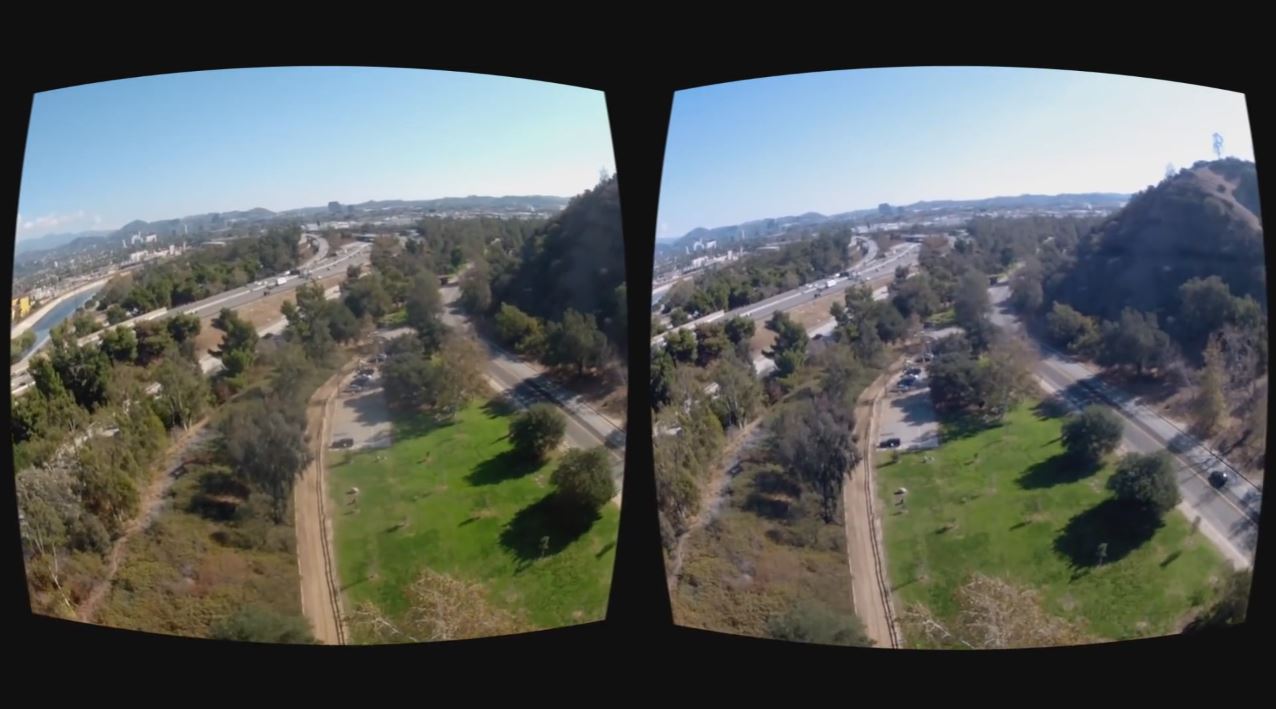 Just imagine you being on the ground, feeling the grass between your toes (at least that is how I do it, I stand in the park wearing trousers), and seeing yourself lift high up in the sky while turning your head around to see the landscape. It can become quite an overwhelming experience, especially if you do it for the first time. However, there are still some obstacles you need to address before doing something like this.

Problems That May Arise

When we first got our Rift headset, getting nausea was quite unpleasant (depends of persons tolerance). Although the new upcoming Oculus Rift headset will probably have these problems solved, we still have to deal with input lags on our DK1’s and DK2’s. That problem is even bigger when you try to hook up the camera to a quadcopter and feed the information wirelessly to your Oculus Rift. Because of that you need to find the best equipment that does not create huge latency issues. And that can become quite expensive.

The price. Finding equipment that is needed for Oculus Rift FPV can become quite a challenge. People have been searching for best ways to have low-cost setup while not losing performance. And although there are various ways to make it all work, finding this golden spot is harder than you think. 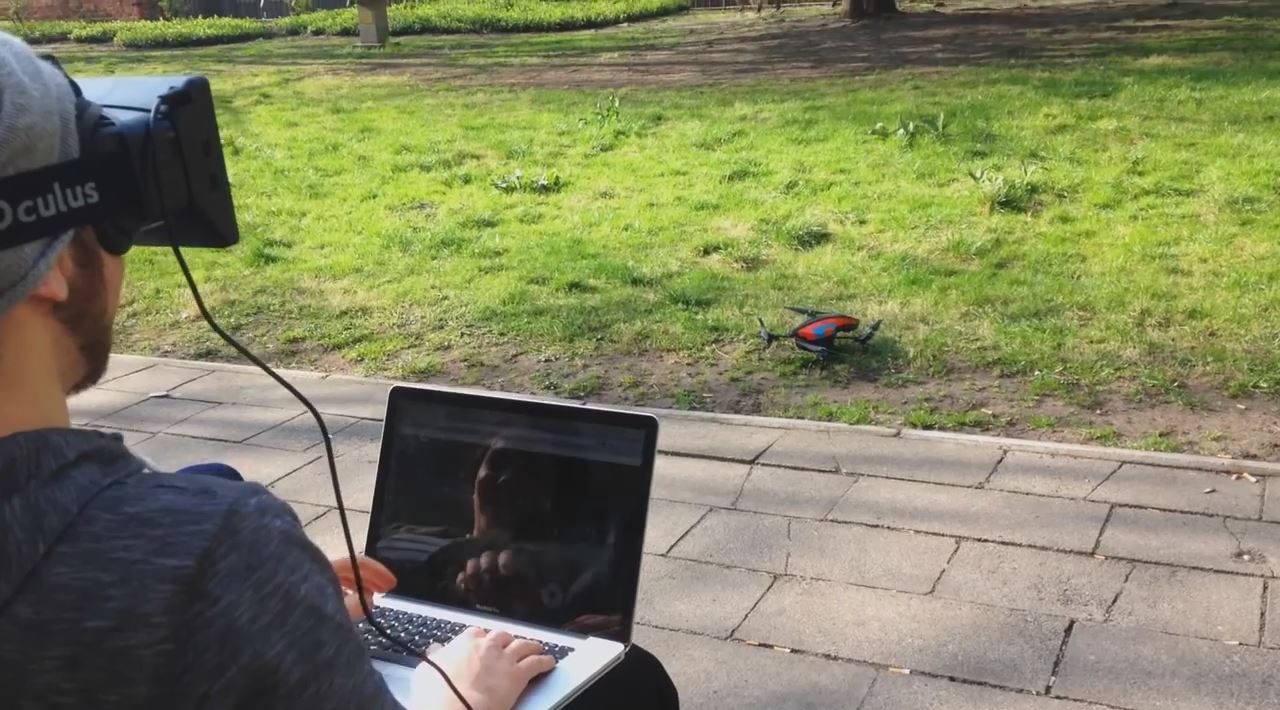 For example, just a few months ago, a new drone called Parrot Bebop was released to the public that supports hooking up the Oculus Rift headset to their Parrot Skycontroller device (Update 2018: Removed the dead link). It enables you to control your drone with Oculus Rift’s head tracking, as well as with the controller. However, the price may become an issue here, as the quadcopter itself costs almost $649 ( around €583). I addition to that, you get a bad image quality, no 3D, and you will have to charge the battery for an hour just to fly with it for about 12 minutes. Although it is a cool concept, it still needs some polishing around the corners, which I am sure will be addressed in the near future.

Hobbyists and technology enthusiasts have been quite active in this area. There have been numerous Reddit posts with random people asking questions, giving guides and sharing their inventions to others, while trying to make as cost friendly as possible. One of the best setups has actually been published in Oculus forums by a username called Grix. He gave people a good step-by-step guide for the best Oculus Rift FPV experience. Although the posts itself may be quite outdated, it gives you important details that you should know when trying to set everything up.

My personal favourite setup was from this guy:

It looks absolutely amazing, which I would love to try out if I had a chance. The responding time is much better than on the Parrot drone (since Oculus Rift head tracking will move only the camera, not the drone itself), and it will probably have a much longer working time.

The Feature of Oculus Rift FPV

Although it an early state not only for the Oculus quadcopter, but for the Oculus Rift itself, the feature looks quite promising. By the time we get an official Oculus Rift headset with its improved specs, we should have a much mature virtual reality market, alongside with its accessories, and all kinds of 3rd party programs and devices.