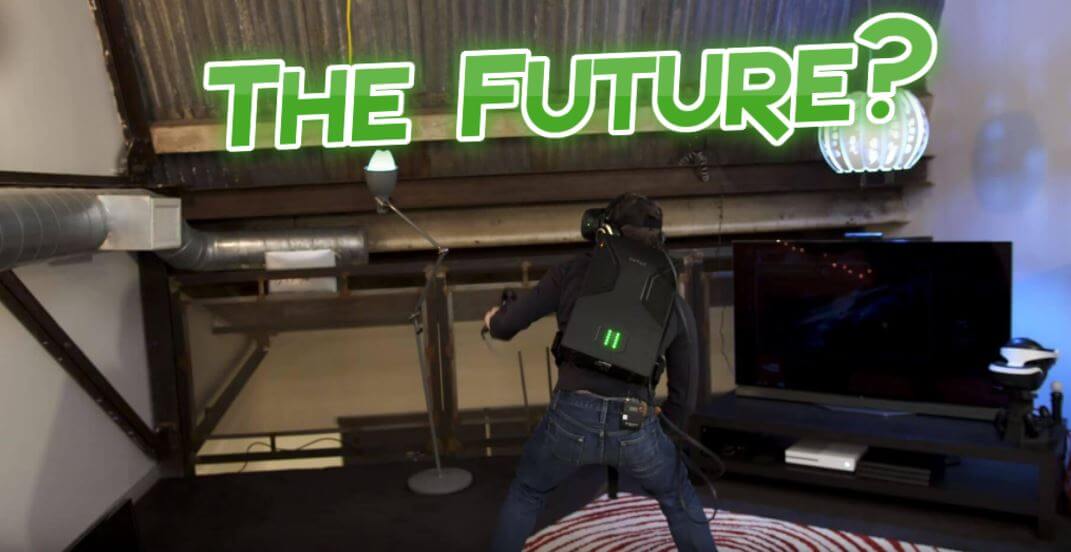 PC VR Backpack – Should You Actually Get One?

VR Backpack is something that may make your life easier in VR…. or maybe actually make it harder.

Don’t you just love when something new comes out and publishers immediately jump on it and make it look like it will change the industry? And then when push comes to shove, there is silence. That’s how I feel about VR backpacks… lots of buzz earlier but not much substance behind it.

Some news sources made it look like they finally fixed the strangling wire issue that bothers many VR users. According to many, with VR backpack we won’t have to deal with the worry of stumbling accidentally and injuring ourselves. But does it really erase one of the problems that VR has? Or does it just create additional ones?

Well, I’d say they are not meant for us regular consumers. If you are a consumer that wants to use it for entertainment at home, these are the issues that you’ll notice:

Problems That VR Backpack Has 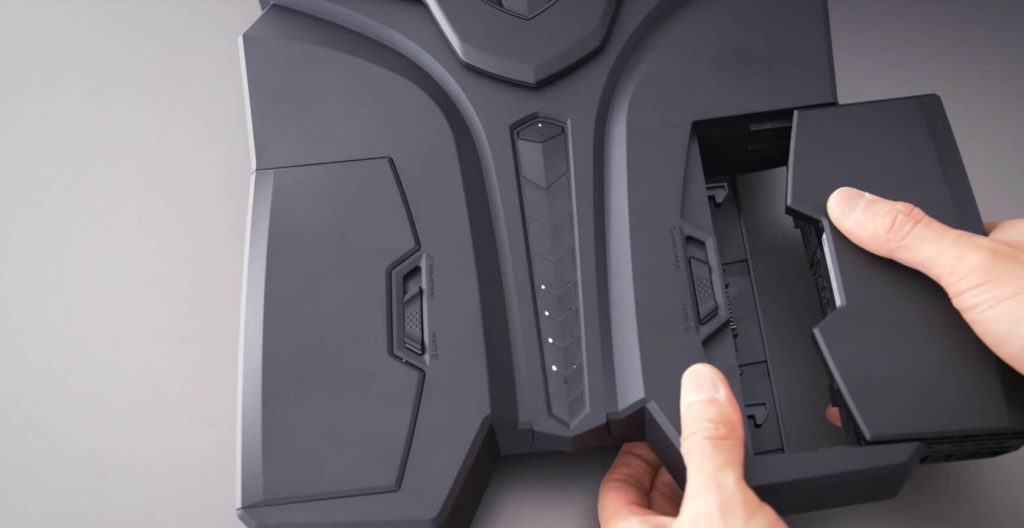 Battery life ain’t the best, let’s just put it that way. Take MSI’s VR ONE virtual reality backpack for example – battery works only around 60-90 minutes. After that you have an option of replacing batteries with extra ones (which you have to separately buy), or wait till they are charged again.

I do have to say though, in VR there aren’t many games out right now that you can play for hours on end without pausing. You are bound to take a break, and that may be the time to recharge the batteries. However, the worry of your VR backpack just dying out after you played for an hour is quite unpleasant. Personally, I would rather have a cable attached to me than worry about VR game dying on me.

It is awkward to put everything on. You will have to put on the VR backpack, tighten the shoulder straps, belt straps, put on the headset itself, then headphones, and finally find VR controllers. 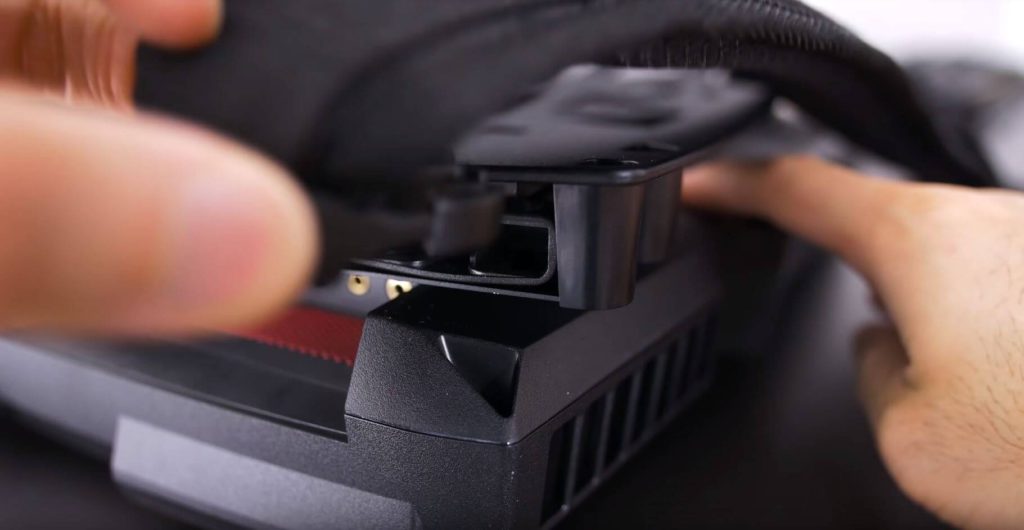 Although at first it might seems like you are going on some kind of a military missions (which is quite awesome) after a while it becomes tedious. That’s the problem of finding a perfect solution to problems. You fix one thing, and another one pops up. The setup itself has never been very good with VR. Although we are working on making it as seamless as possible, it’s still a bit awkward to set everything up for VR. VR backpack wouldn’t help the issue.

Price. That’s a stingy one. That’s the problem with VR accessories at the moment. Some of them are quite awesome and useful, but the price is what makes it hard to swallow. If we want VR to become mainstream, price is definitely something that should be kept down. And as you probably know, it’s already happening, but if we keep adding stuff that costs as much as ≈$2,200 on Amazon, things become a tad expensive.

That’s why we as regular customers shouldn’t really purchase it…. unless you planning to use it for:

Almost a perfect match. You plan to show your VR game or VR equipment in various places? Then search no more. With VR backpack you won’t have to worry about carrying all the necessary devices and gadgets to power up everything. No uncomfortable wires and no electricity restriction.

As I’ve done a few showcases myself, the one problem that was quite irritating was to find a place that had no restrictions in terms of getting juice. And even if you found one, some places didn’t allow cable extensions to be tangling around your feet, so you had to talk to owners of that place to get permission.

If you plan to showcase virtual reality, a VR backpack is an ideal match, especially since every user will try VR for only about 10 minutes, which allows you to swap batteries and charge secondary ones.

The freedom of movement.

That is actually what virtual reality backpack is made for. That is their selling point. Does it actually feel liberating? Well, despite you still being limited to sensor tracking range, it actually feels quite great. All the movements that you make there are almost without worries. Cable is gone! 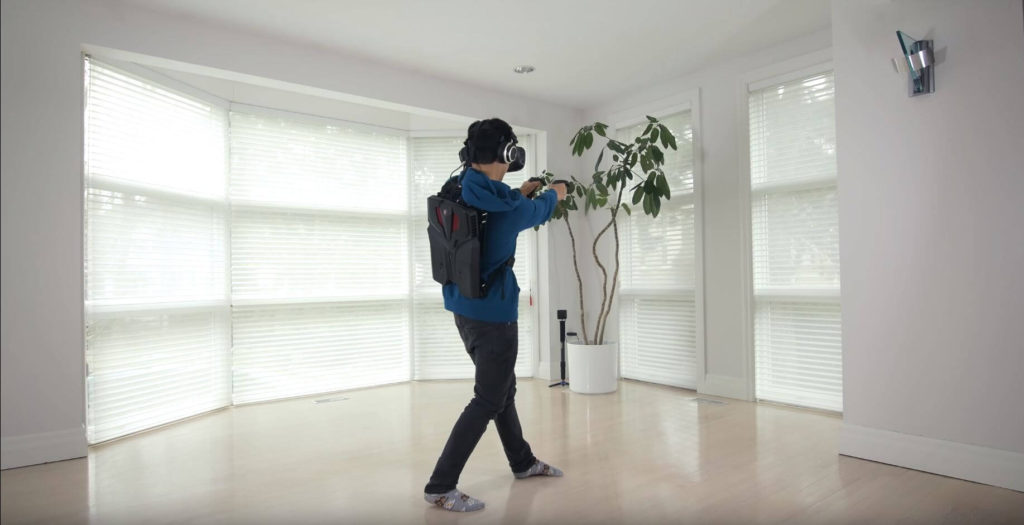 Everything feels natural and the backpack itself isn’t heavy. As far as weight, they weigh about 10 pounds, so luckily it’s not an issue. It could have been, but apparently the manufacturers figured it out.

Immersion is the most important part of any game. When we sit behind a computer and play video games, we can often lose ourselves to fictional world. In VR, it’s almost the same. That is why I am extremely glad companies are working on different solutions to fix the problems that virtual reality has, even if it’s not quite there yet.

Freedom of movement is great, but it created another problem, and that’s battery life.

So is this portable VR device really worth the trouble? For us regular citizens… it is probably not. Only if you do showcases, or demonstrations of particular applications.

I do think, however, that it’s a glimpse into the future. Cables just have to go, period. It creates far too much hassle and unnecessary distractions, so seeing these kinds of “prototypes”, does fill me with hope of seeing something amazing few years down the line.

After all, the rumors of Santa Cruz do lead to something. And that something is quite similar to portable VR devices, only this time it is not connected to VR PC.

If you are interested in getting yourself a VR backpack, I made this article (coming soon) that lists the best VR backpacks with all their pros and cons.