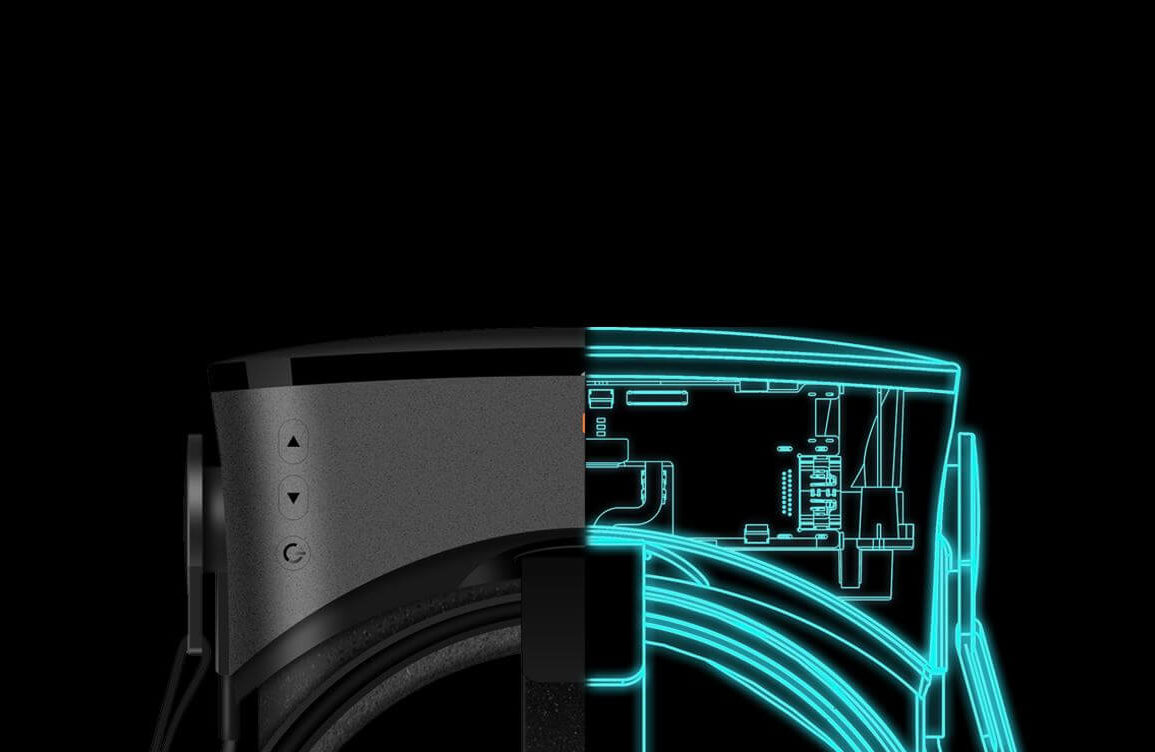 VR enthusiasts, at the moment we are right in the middle of VR preparation for mainstream audience, which basically means, we get a LOT of different VR headsets thrown at our face, all in hopes for you to choose their product.

Pimax 4K VR headset is one of them.

I am a dedicated VR stuff reviewer, so I am usually rougher to VR products compared to other reviewers out there. Just a heads up.

When you read or hear about Pimax 4K VR Headset, the first thing you are probably focusing on is the word 4K. If you are familiar with technology, VR PC hardware, rendering, and stuff like that, I’ve got no doubt in mind you are worrying about the performance. There is a reason why the biggest VR names are running at 2160×1200 resolution and didn’t go higher (then). So why is Pimax 4K VR headset so bold with it? Is it because they have access to better technology compared to others a year ago? Maybe, but the more likely reason is… cutting off some features.

We’ll go right into those things, but first, lets talk about external stuff. 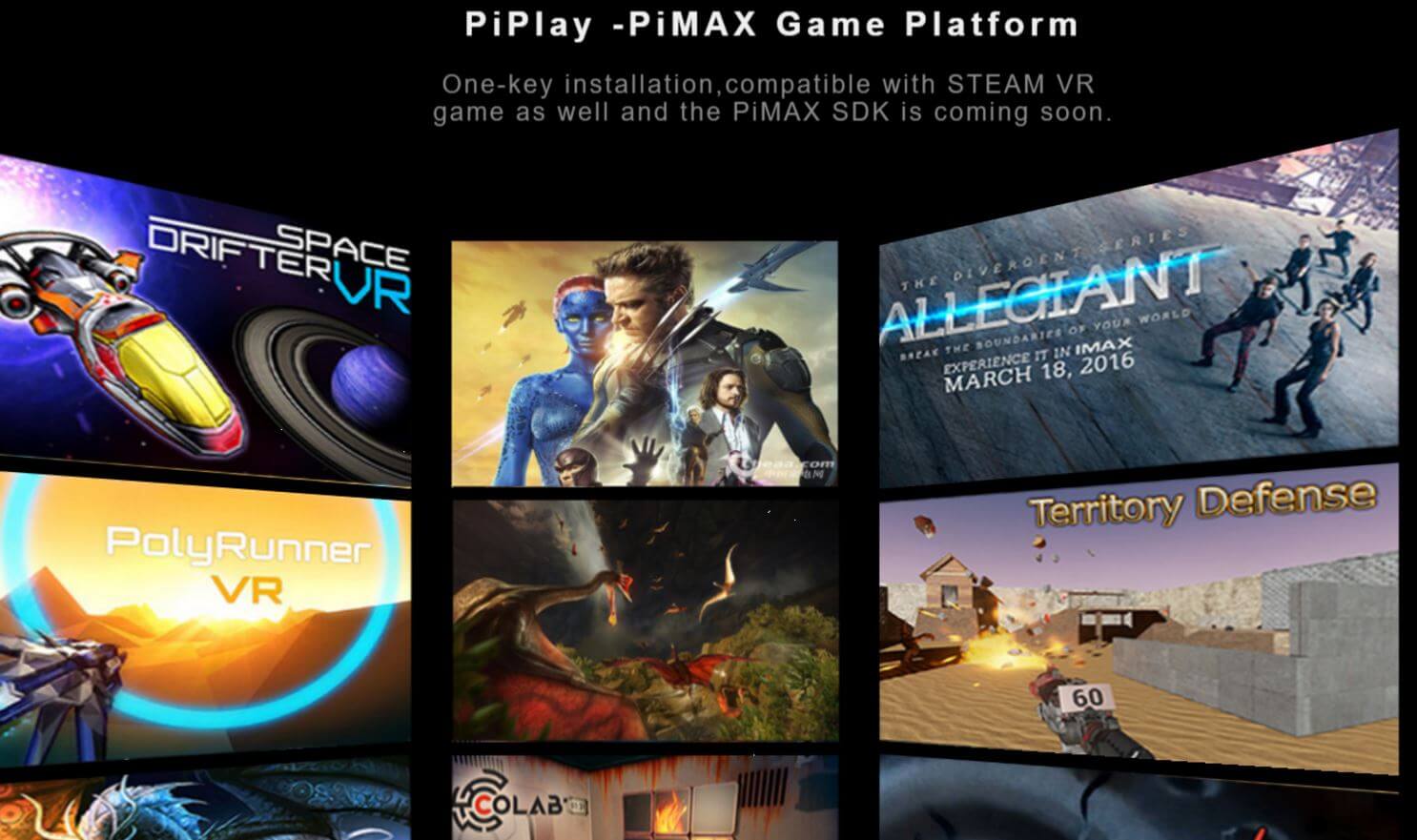 One thing I hated about VR was the time it took to install everything correctly. Well, the first time I installed something VR related I was extatic. I was super excited and didn’t mind to take my sweet time to make everything work properly… after that I wasn’t as extatic. Making a few VR showcases in my area, you start to wish it was easier and not as time consuming. So personally, it’s a huge deal for me.

Luckily, Pimax 4K is super easy to install. You basically need only one wire to connect, and you are done deal. Headphones can be installed directly to Pimax headset, so there are no problems with that.

One thing that urked me was the software part of it. It’s still easy to do once you get the instructions, but you do have to visit a site and do it from there. No CD or anything like that for installation. Well alright, you might say, but once you visit a Pimax site…

I understand, their first language is not English, even mine is not, but you could have hired someone that writes with minimum spelling errors, and also hired someone to check the one who wrote it originally. Otherwise it leaves you with a weird taste of ‘oh crap what did I buy myself’ in your mouth.

It doesn’t help that the software they use is called PiPlay. Do me a favor and google ‘PiPlay’. The official installation for PiPlay is on the 6th row… Considering that many will search for installation guides, having an original name is essential for it to pop up on the first row in google.

Have to be extremely cautious with these things (even though the page itself was quite funny to read). User comfort in finding these things is important.

This I appreciate the most. I LOVE those headphones, especially because of how well designed they are for VR headsets. Essentially you just have to place them in-between the side straps, so they cover your ears comfortably. The cushions feel very high quality and the sound is even better. 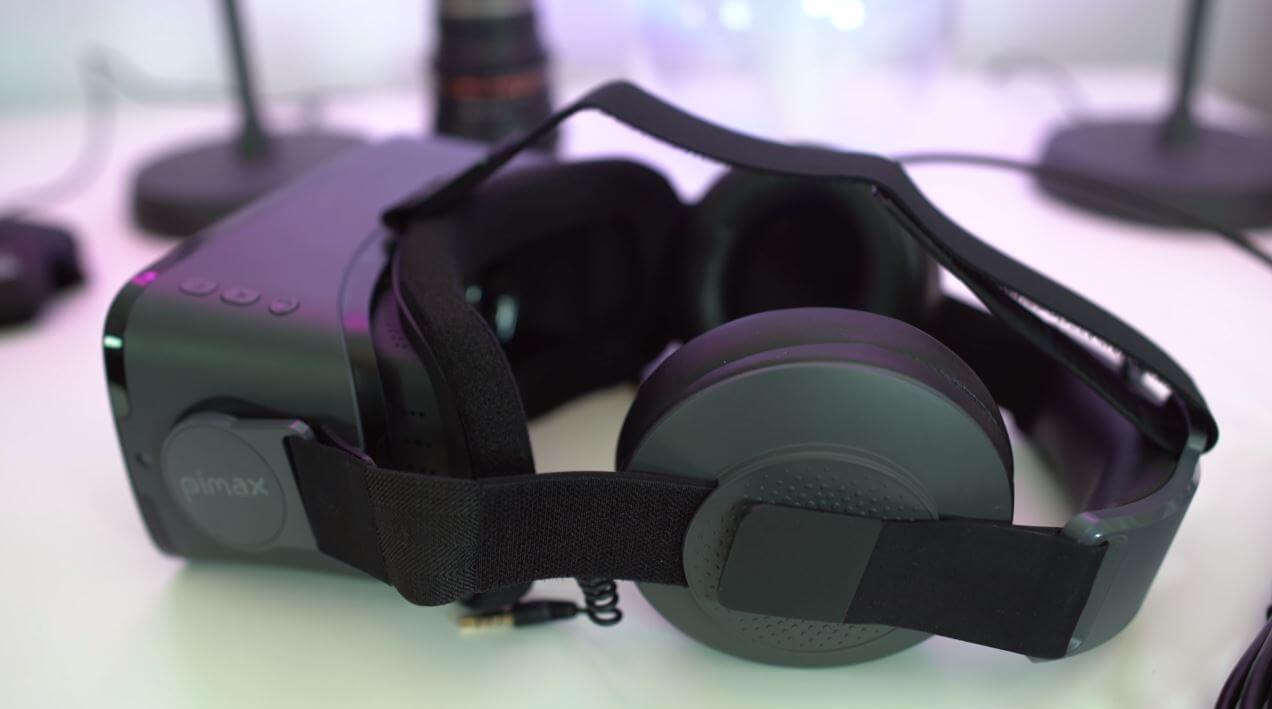 They don’t overcompensate anything with super boomy bass. Sound is elegantly balanced, and truly feel like a 100+ dollar headphones in terms of audio. If you are in need to lower or raise volume, it can easily be done through headset, as they have volume buttons installed.

If I wish one thing for my HTC Vive, it would be to have a similar headphone style. A huge thumbs up to Pimax headset for that!

In terms of design, Pimax 4K VR Headset leans more towards Oculus Rift than Vive. It’s kinda funny to watch these headsets float to surface, and look exactly like its brother near to him. Maybe it’s due to lack of imagination as to how it should look, or maybe it’s because this kind of look is most convenient and comfortable for VR users and creators.

Either way, it doesn’t look anything special. I do kinda hope more VR headset creators take notes from PSVR, but if you want to run the ‘simplistic’ route, be my quest. At the end of the day, VR comfort and experience is what matter the most, not aesthetics, right?

Apart from wonderfully done headphones, it feels quite light. I love how they advertised the weight for Pimax headset though: “3 eggs weight”.

Like seriously? What are we talking about, like ostrich eggs? Because I seriously don’t want to have a 6kg (13 pound) facehugger strapped on my face. The actual weight for it is 500 grams, which is around the same as Oculus Rift and HTC Vive.

So sadly, it means it ain’t a chicken egg either. Although you might feel it’s a lot lighter than HTC Vive, and that’s because with Pimax VR headset you’ll only be sitting down, which means you won’t feel the cable weight as much. 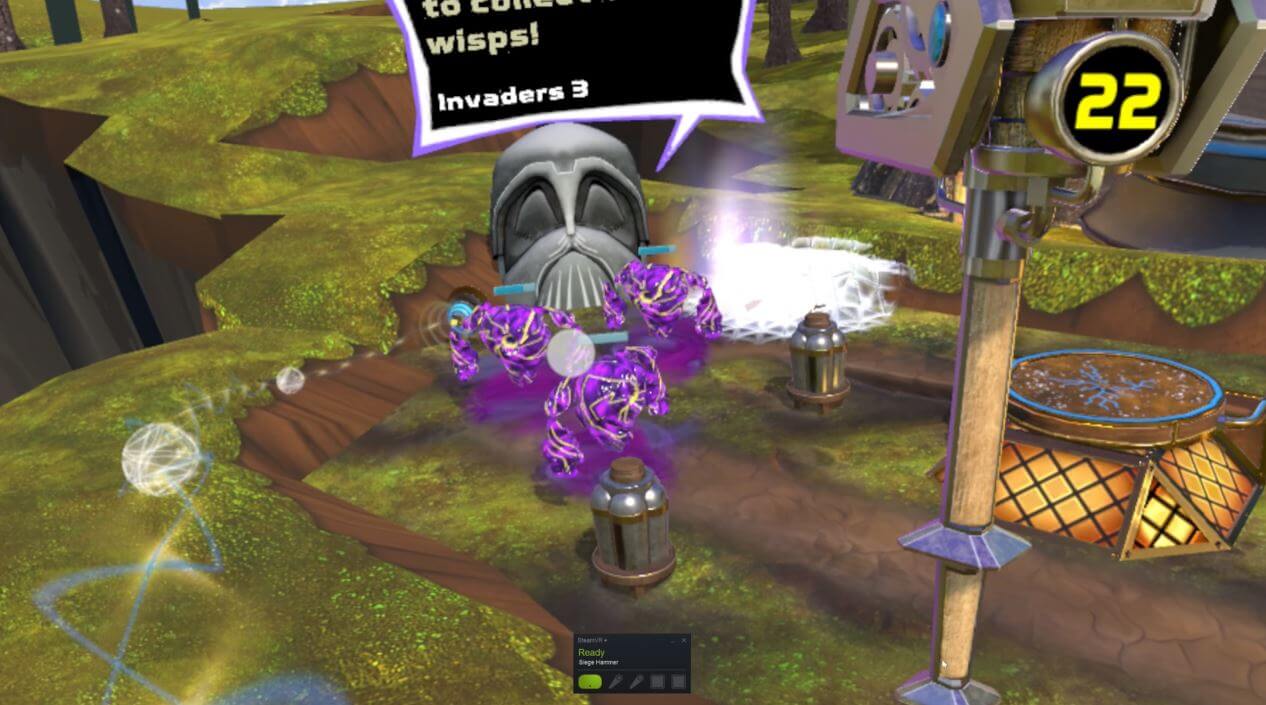 There is no room-scale tracking, let’s just get it out of the way. You won’t be able to move around the room because the cable is only 8 feet long, and even if it was 15 ft like HTC Vive cable, there is no positional tracking. That means, no leaning in any direction, and no crouching.

That fact only means the amount of games you can play is fairly limited. It might be a huge dealbreaker if you are into full immersion. However, you can connect your headset to SteamVR, and launch the games. But, apart from no positional tracking, you won’t have any VR controllers.

That is another huge minus for this headset.

As you see on gif above, controlling everything will be super hard and ridiculous. The only way to play normally is probably to buy 3rd party controllers, but that is not an ideal situation given the fact that games are mostly made for either Touch or Vive controllers.

Now to the part where Pimax shines the most.

The bread and butter of this headset is obviously its resolution. If you have tried other headsets on the market, and then tried this one, you’ll notice an immediate difference in clarity and overall level of detail in everything. No screen door effect, nothing.

But, there is a but. It’s not true 4K. On monitor PC’s it’s easy to categorize them by their resolution, after all they have only one display. VR headsets use two. And the word ‘4K’ is split by two screens. Left screen is 1920×2160 and the right one is 1920×2160. You still wouldn’t see a true 4K resolution like on regular monitors.

That means VR creators and their marketing team can either call it a 2K VR headset or 4K. Seemed like a no-brainer to them since technically they are not lying. 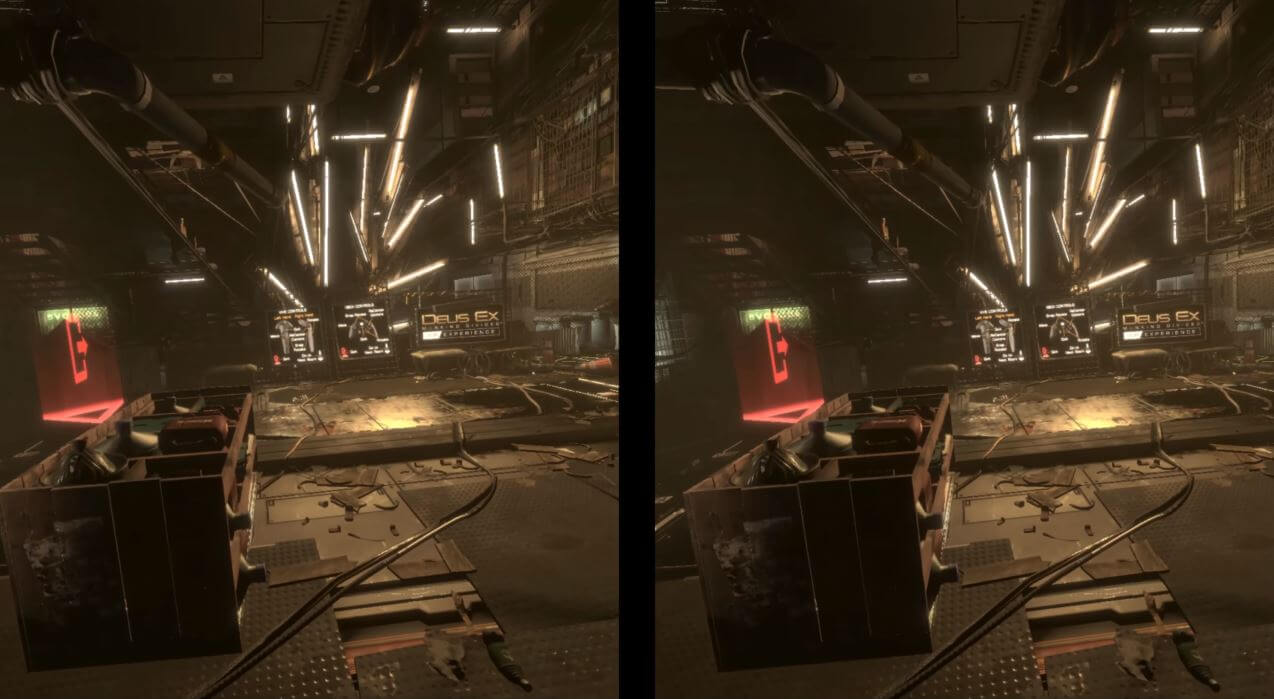 Be it how it is, the resolution per eye is still better than on Oculus/Vive (theirs is 1080×1200). Having such an improved resolution means some problems are non-existent – problems like screen-door effect. On Oculus/Vive you are always seeing those bars everywhere around you, which does disappear over time when you get used to it, but the life without it would be many times better. On Pimax display there is no screen-door effect. Everything is super clear (except from distant objects) and crisp.

However, there is a reason it can pull off such high resolution to each eye. Either they improved the tech for it, or they had to compensate it with something. And the compensation is:

Framerate is capped at 60 and you can’t make it higher in any way. If you’ve been around, you probably heard of everyone saying that framerate is the most important part for a good VR experience, so it might push you away. After all, nausea in VR is already a big problem (for some) and making it even worse by having 60fps is unacceptable.

Be it as it may, it is actually not as bad as you imagine. You can feel the difference from regular VR headsets for sure, but it doesn’t really bother you as much. It is probably contributed to brain warp technology where it flashes images to you one screen at a time. So even though it is 60 fps, it tricks you brain into thinking its closer to double of that. Really creative thinking if to be honest, and awesome way of tackling the problem.

However, it doesn’t come without repercussions. Since it flashes to you, you will have black images each frame at one eye, making everything look at lot dimmer. Low brightness has been mentioned on Pimax forums numerous times.

Another issue brain warp technology creates is ghosting (and probably due to LCD screen) . You will see traces of things left behind for a fraction of a second if they are moving around the scene. If you want to experience this, just move your mouse around on a black background (works best with 60hz monitors). In VR everything is enhanced so seeing stuff like that will break your immersion to some degree. 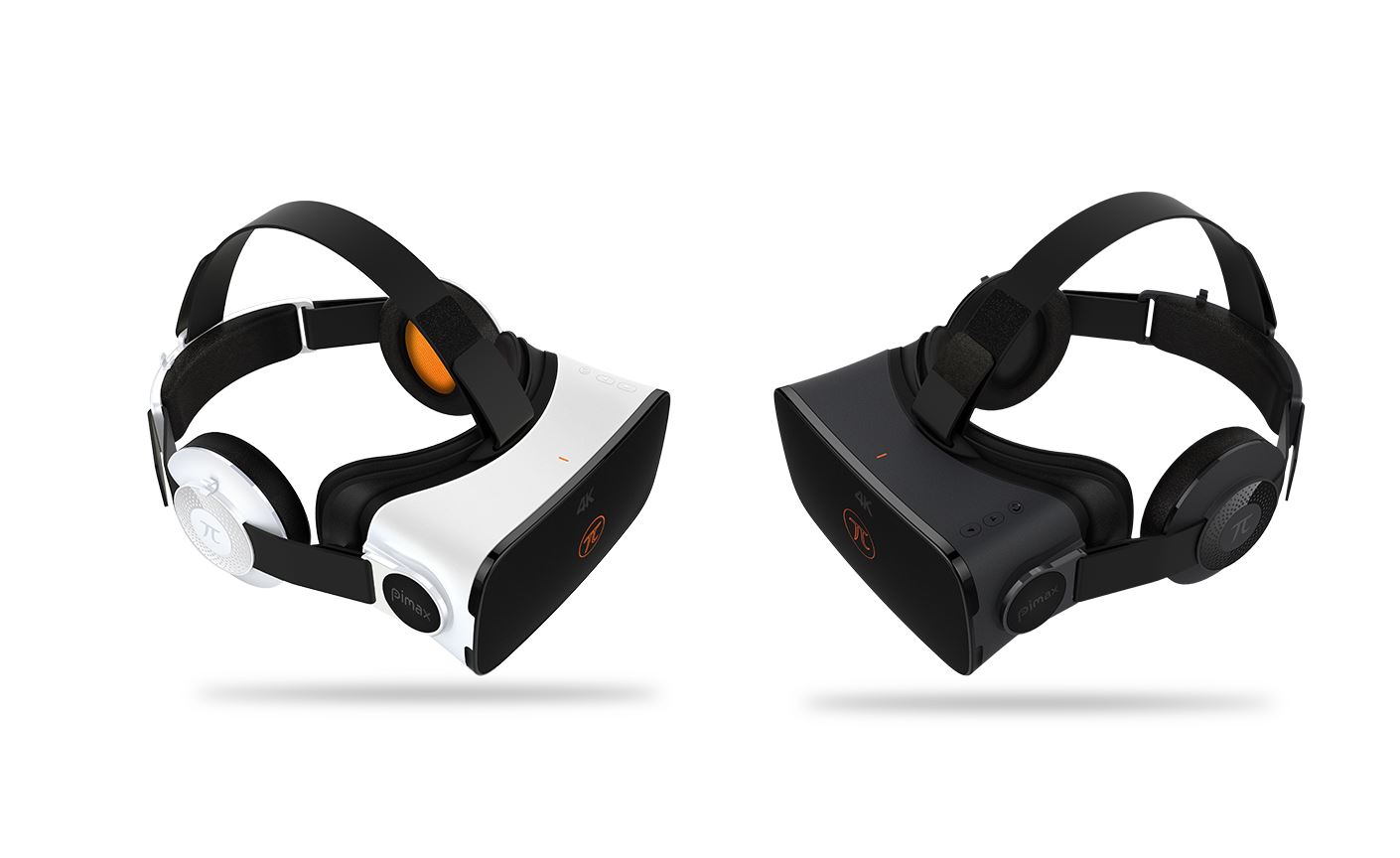 There is no perfect VR headset out there. If you pick one, and you see it has better stats than another one of same age, it probably means they sacrificed something to get it. In this case, Pimax sacrificed room-scale tracking, brightness, ‘fluidness’, controllers for a screen that is super clear.

Having a 4K headset is great and all, but you will run into frustration. My advice would be to decide for what do you want this headset. Having such great resolution is great for movie watching, since you basically don’t have to do anything apart from lying on the bed (if you want), and embrace the huge cinema that is in front of you.

I image the movie watching part is going to be even better once the Pimax 8K version comes out (subscribe to keep up with latest news). Having a crisp image is super important, and it’s something current VR headsets lack. Apart from movie watching, it could be well implemented into niche gaming genres like VR racing or flying (Elite: Dangerous). You would be stationary, positional tracking is not as needed, and controllers are not important.

All in all, it’s up to you to decide. You know the pros and cons. If you searching for something purely for gaming, this one may not be for you, but if you want to experience just VR without spending too much money, it might be worth your money.

Have fun in VR!

If you want more VR related articles, make sure to follow Rift Info on social media!