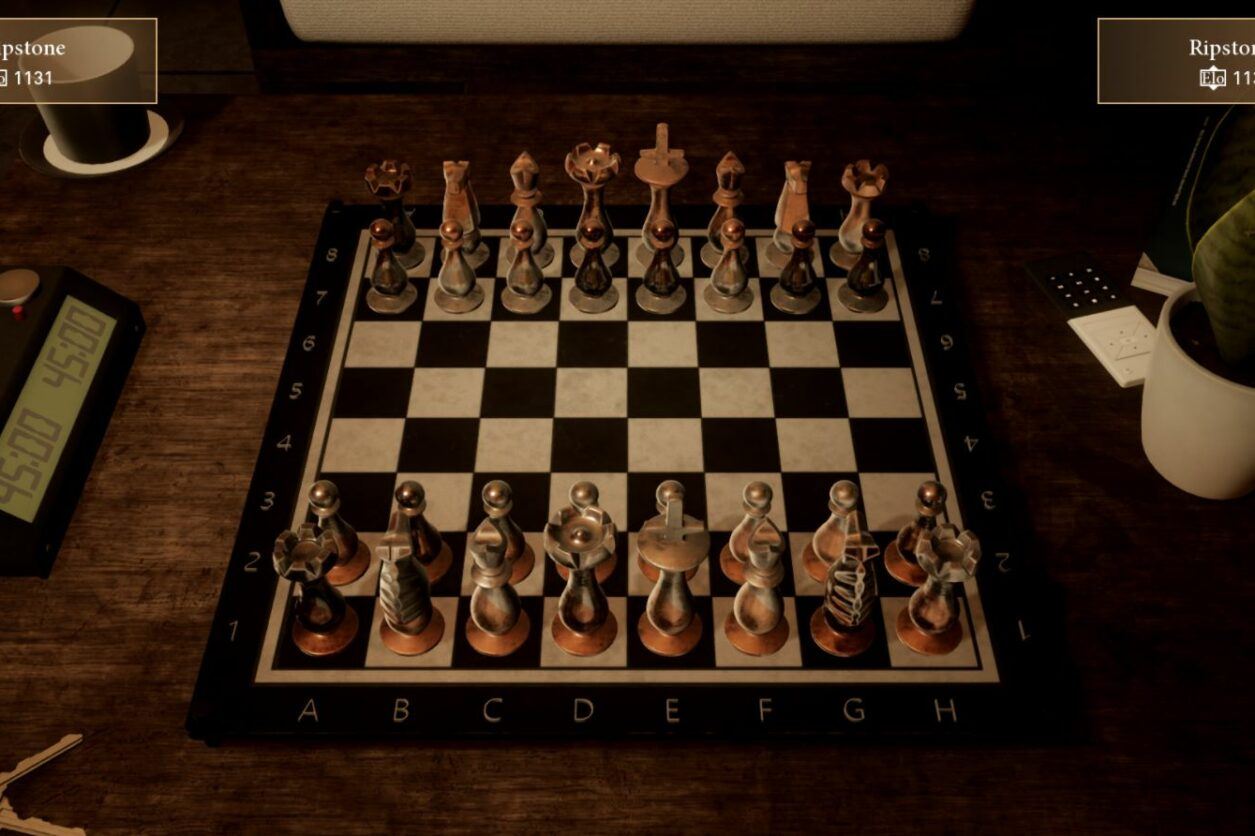 This is The Best VR Chess Game – Here’s Why:

After watching Queen’s Gambit, I noticed my curiosity towards chess has grown tenfold.

As a fellow VR’er, I asked myself, what’s the best VR chess game?

It seems I am not the only one whose interest has peaked:

This graph shows the chess trend this past year.

Yes, Covid might have influenced it a bit, as many people are sitting at home bored. But the biggest factor is the Queen’s Gambit TV series.

That show aired on Netflix in October 2020, and yes, many people fell in love with it.

As there is little information on what VR chess games there are, let alone what’s the best one, I feel like it’s my duty to educate on this topic a bit.

Let me start with the list of VR chess games that are out there.

I will introduce you quickly to chess games that are VR supported, and then tell you the winner of them all.

Scroll down right now if you want to know the answer immediately. 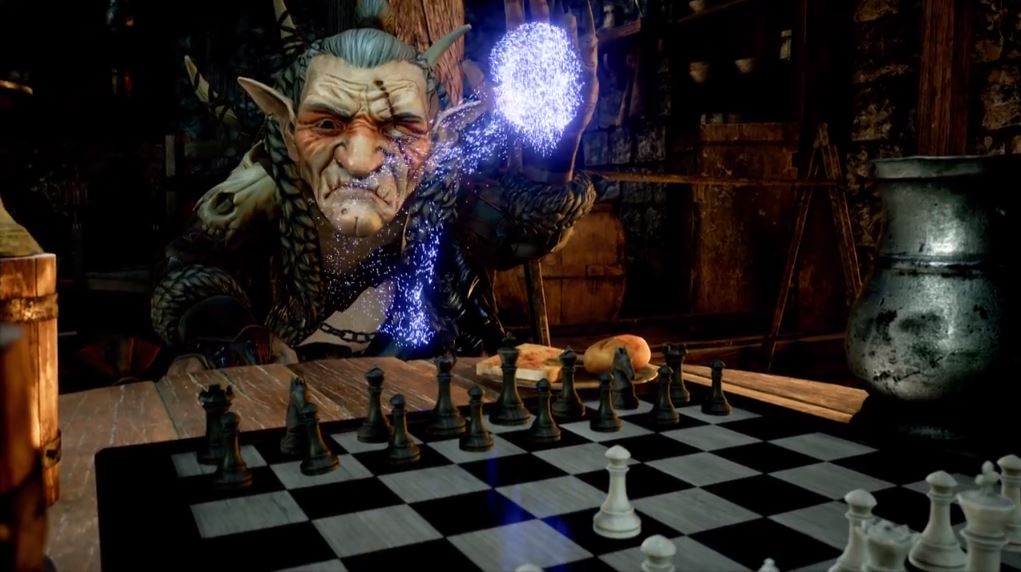 This one was released in 2017 and is still in Early Access mode. I mean, if I were a betting man, I’d say that the developer has gone to do his own things.

Still, it has its unique touch to the world of chess.

You are battling against a goblin that looks a bit pissed, in a place that looks… actually quite awesome.

It has that comfy tavern feeling where you wouldn’t mind spending hours in. There is a small problem though.

Your only opponent is this goblin that sometimes freezes up the game. Despite the developer’s promises, we still haven’t got the multiplayer option to play against others.

This goblin is powered by Stockfish Chess Engine. It’s an excellent free chess engine that many games use.

Too bad the game isn’t finished. 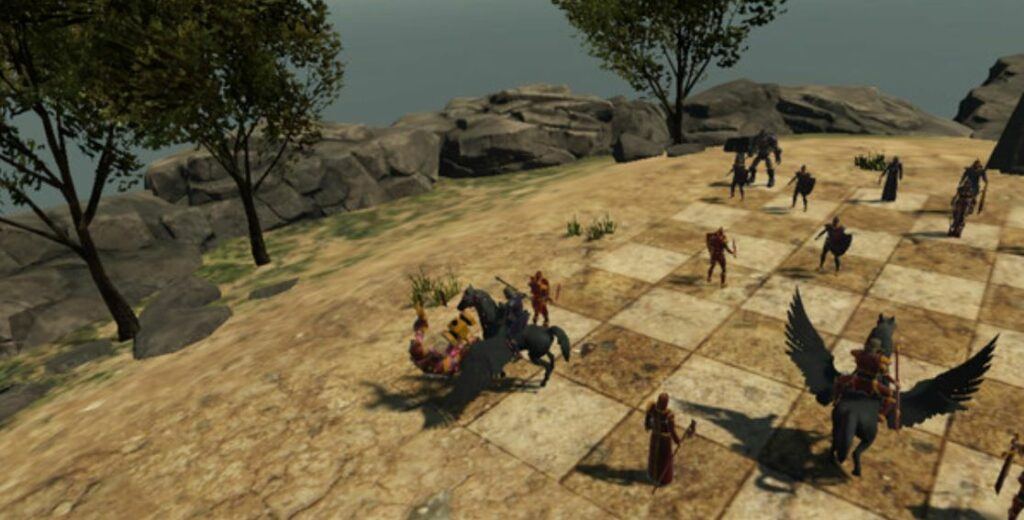 I give 10 points to game name creativity.

ChessVR’s selling point, as with the previous Magician’s Gambit, is its fantasy aspect. Contrary to the previous game, however, is that the chess pieces are the ones that draw the most attention, not the opponent.

The chess pieces are animated and actually give life to an otherwise typical chess game.

As with most unfinished chess games, this one has its own share of problems.

At least this game I can play with other VR headsets as well.

Another 10 points for name creativity.

This one is actually made by a random user in forums after finding out that there is a void in the chess community for Oculus Quest.

He made VR Chess Beta in a few days and released it in Discord or people to try it out and give feedback. Seeing his Youtube channel, I see that he still works on it and posts game updates frequently:

I actually applaud him for doing it in his free time, as the game itself is free for all.

On top of that, it looks much more polished than games that are costing 10 bucks even.

At its core, the game is simple and straight to the point.

You can resize the board to whatever size you want, rotate it around in case you are lying on the sofa, change the difficulty, and ctrl-z your movements in case you need it.

It got bugs but seeing how the developer reacts to those comments, I am sure that they will be exterminated.

I wish it had a multiplayer option as well. 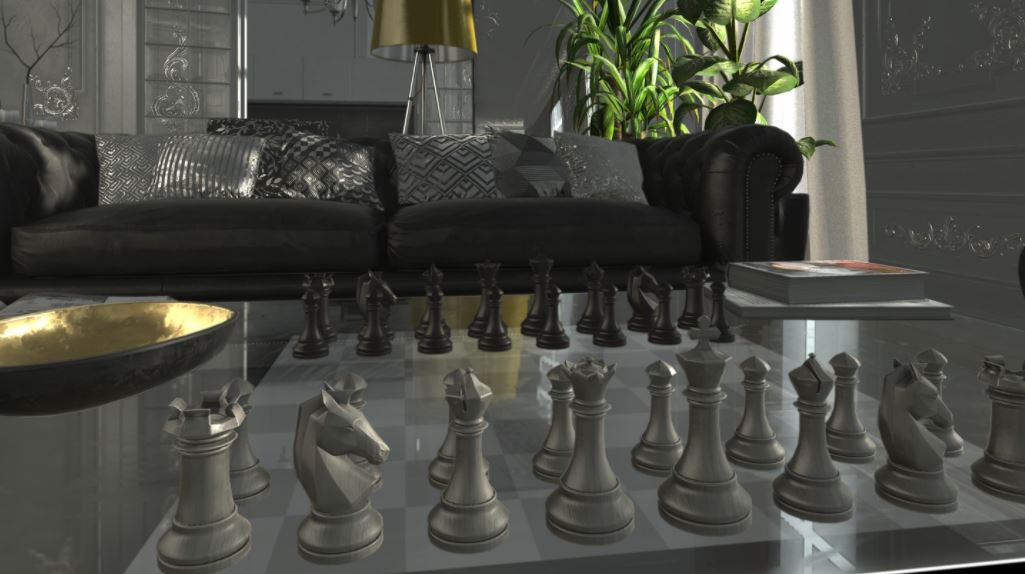 Really, I sometimes wonder if these people congratulate themselves over picking such genius names for their game titles.

Someone should tell them there are chess categories and genres.

I am sorry, but this game is all show and no substance. Its only selling point, or advantage over other games, might be its graphics.

I mean, come on – it’s like playing Overwatch for graphics. Not only is it quite primitive in terms of gameplay itself, but it also has bugs that render the experience to being useless.

If I were you, I’d steer clear from this game until they decide to take it seriously with fixing the game. 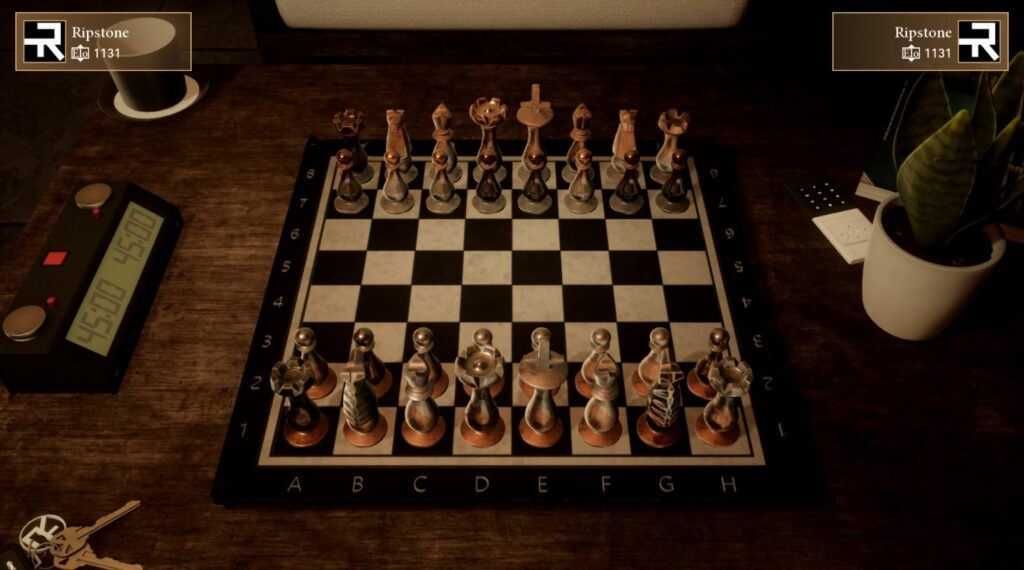 Now, this is what I am talking about.

Chess Ultra developers from RipStone have gone ‘serious mode’, and created a beast that is not only bug-free and clean but brings some eye candy to a normal chess game through surrounding environments and opponents.

It is not perfect, but it does the things that chess players want the right way. It has a multiplayer option, and that is the biggest seller for me, personally.

There are many games that do chess well, but due to the lack of gamers playing the game, they do not offer multiplayer. That’s an unfortunate downside for Indie devs.

This is what Chess Ultra offers on their page:

At the time of writing, they offer a discount. Check it here:

Masters of Chess is a type of game that doesn’t have much up its sleeves.

In fact, the only thing it offers is an ability to feel immersed in a luxury room and drinking a cup of tea, while lifting a pinky finger up in the air after each move in chess.

I do like the design of the game, but at its core, it has little to offer.

Your money is better spent elsewhere. 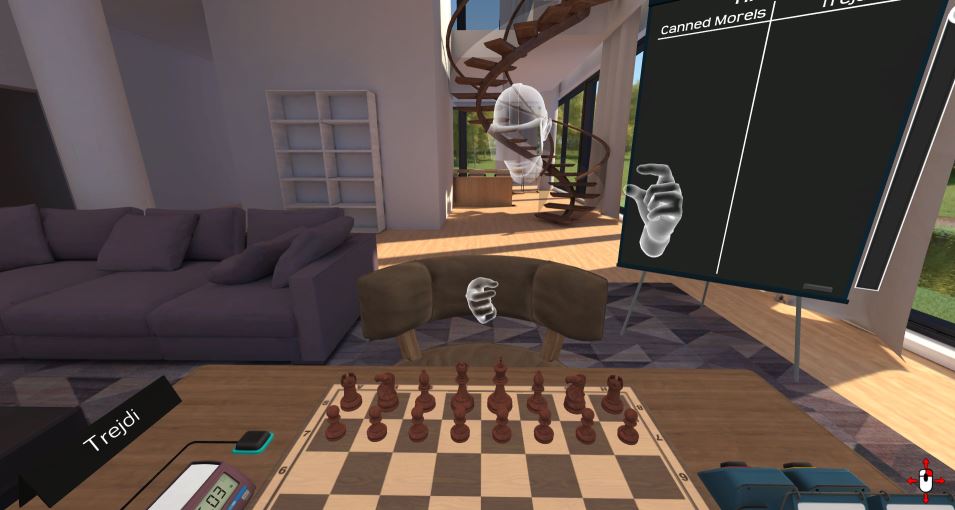 Immersion chess suffers from the same problems that many other chess games do.

Although it has the support for playing against other people, the player base isn’t big enough to take advantage of it.

There are also some bugs that do alter the gameplay. Multiplayer is important, but when the base game is faulty, there is no point building on a shaky foundation. 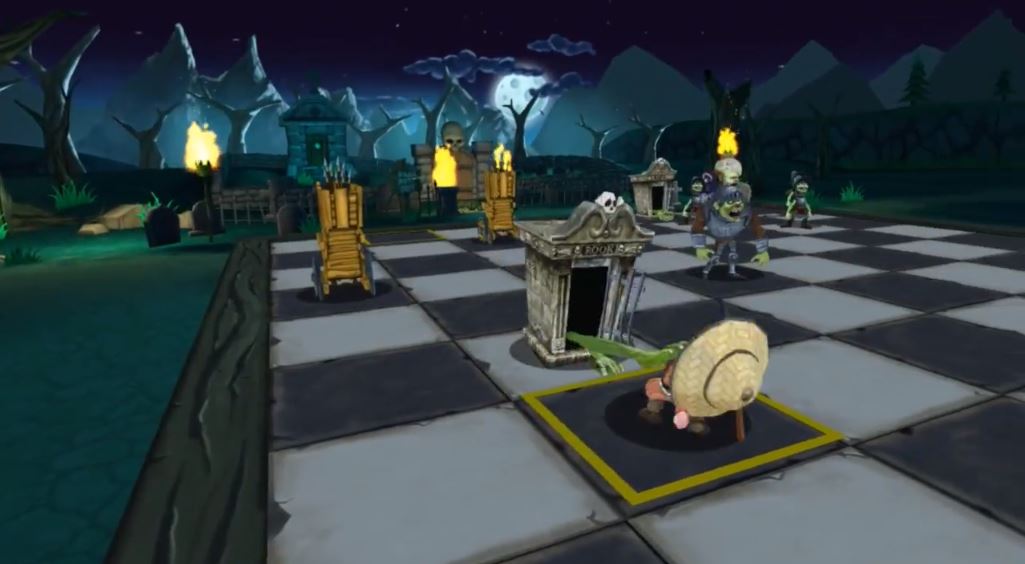 This game puts the focus on making regular chess spicier. They did it by swapping the pieces for zombie figurines.

They fight each other with quite a decent animation.

It is a pleasing game, but unfortunately, the developer hasn’t advanced it beyond early access.

The reason is the lack of interest in terms of sales.

I do have to say that despite not getting any updates anymore, it is more polished than 80% of the chess games that I have introduced right now.

If you want to give the developer some support, you can check it out here:

Get Chess With Zombies Here 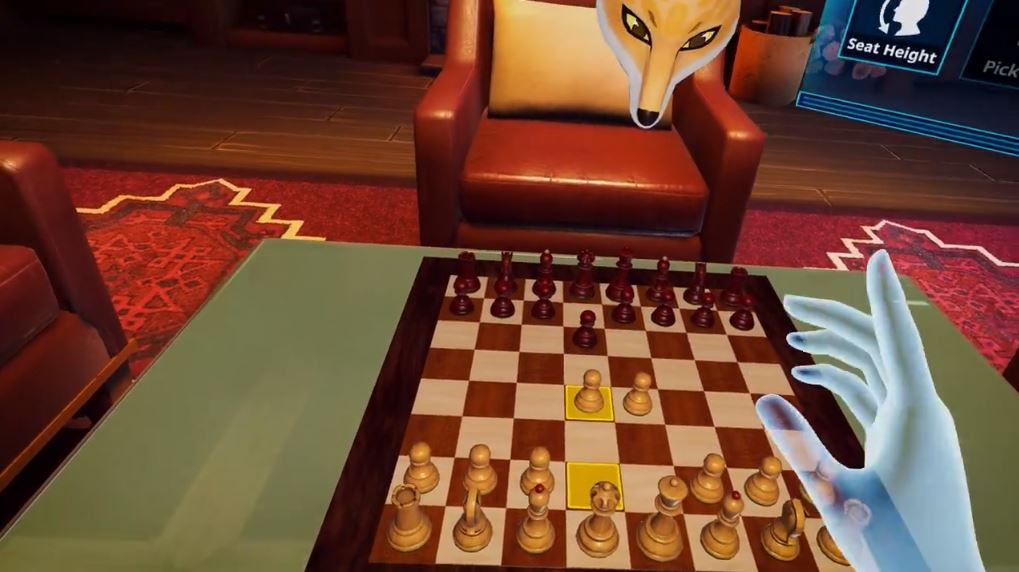 I do like the random fact that they added on their Steam page:

“Fresh Take on a Classic: Chess has been played for thousands of years, but never like this!”

I knew it has been around for at least since the 1800s, but by doing a random fact check, I was pleasantly surprised.

Anyway, back to the game.

Magic Table Chess doesn’t really have its unique spin other than it is free and tons of people getting it.

It has a small community, but not big enough to support it for a true multiplayer experience.

You can, however, play this game with your friends through the invite function. 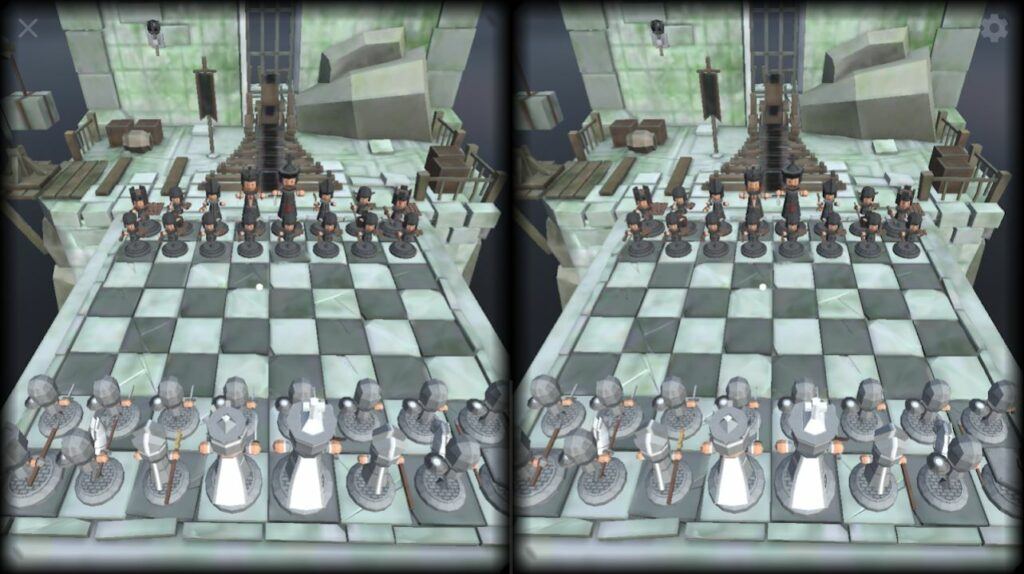 It’s interesting that they decided to blur the killing moves in the gameplay trailer, just because it was too bloody to show.

If you have a cardboard or a VR device for mobiles, I recommend you to check it out.

Personally, I have some issues that I don’t like. For example, the pieces take way too long to move, which is extremely agitating for more skilled players, and the movement of pieces itself is buggy, to say the least.

However, some of the issues are mentioned by the developer himself, and he offers solutions.

It’s not really one of a kind, but the fact that you can download it from Play Store makes it already unique.

This game is free: 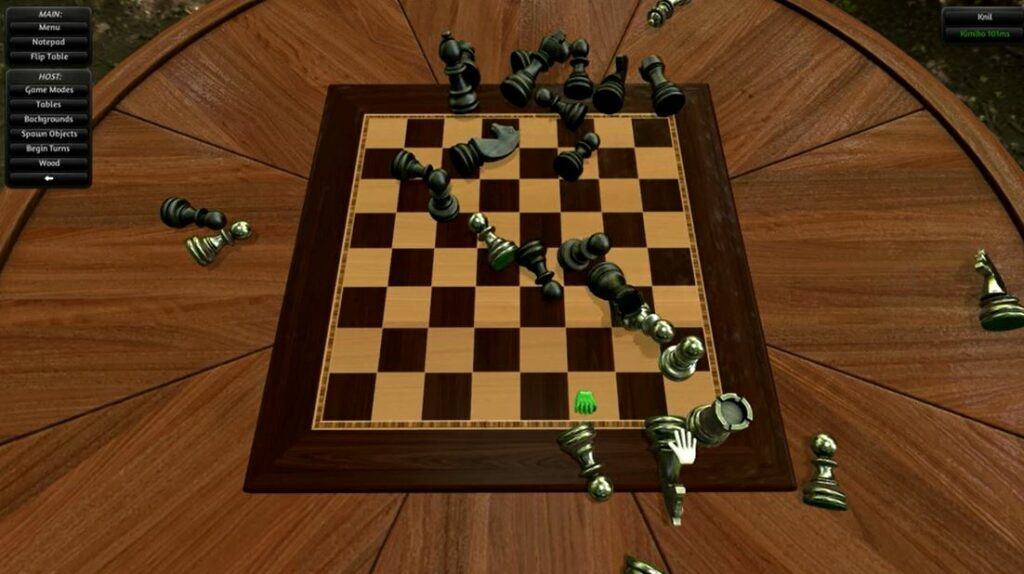 Tabletop Simulator doesn\t really focus on chess only, but the chess part of the game is fairly well made.

There aren’t many parts that are scripted, and that results in fewer bugs. Although fewer bugs are good, it also means that you have to rely on other people to play fair.

Speaking of fair, if you didn’t like the game you played, you can flip the table to show your displeasure.

If you are interested in a game that has a big player base and is constantly updated, I am more than fine to recommend it to you.

The Winner for the best VR Chess game – Chess Ultra

I don’t really like picking winners by popularity alone, but as one of the important components of chess is playing against others, we have to make sure the player base is big enough.

Not only does it have enough users, but it’s also visually pleasing as well. 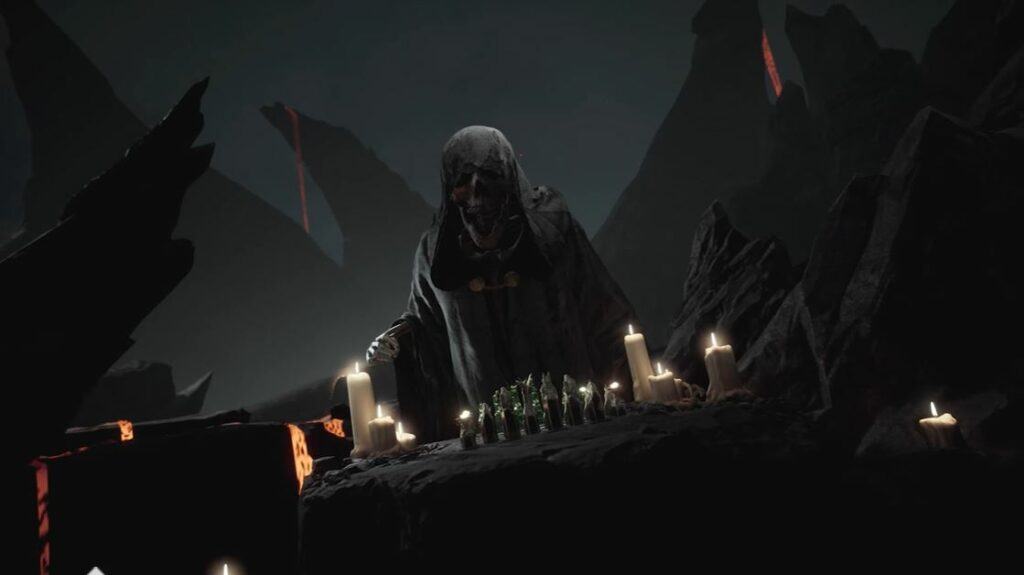 Usually, chess doesn’t really need cool items around the chessboard, but as we are talking about VR, things are a bit different.

It has a decent AI system, many difficulty settings, cool environments, and a decent player base, as I mentioned before.

If you want to give VR chess a shot, this game is what I would recommend.

I consider Chess Ultra the best VR chess game as of this day.

Please consider sharing. If you in any way enjoyed this article, please share it or follow us on social media/newsletter. It helps us out the most.

If you have any other suggestions for games or chess, leave the comment down below for others to see.