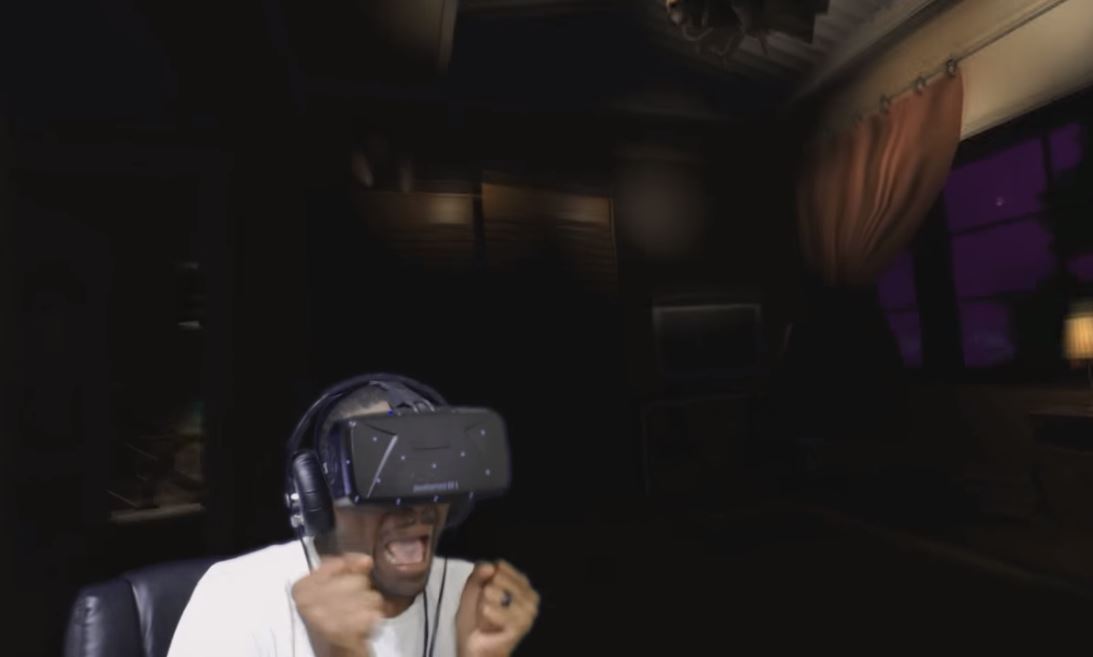 Oculus Rift horror games are one of the scariest things you can experience on this earth… And I am here to introduce you to some of these games.

I am not exaggerating either. Even the amusement parks that have so-called ‘scary houses’ aren’t even that scary because you don’t really have time to sink into that world, and that stuff that you can do, or things that those hidden creatures can do, is limited.

You know, even watching horror movies in the cinema doesn’t do it for me as much as VR. One would think that extremely loud jumpscares would do the trick, but na-ah, it’s the fact that you are responsible for your own actions and seeing monsters bigger than you in front of you… that is what makes me want to go cry in the corner sometimes.

That’s why virtual reality truly unlocks a whole new level of horror for us, and for the developers to explore. I won’t even start comparing it to regular display monitors. If you think 2D monitors scared you while playing Outlast or Amnesia, wait till you try out the following horror games.

It’ll be like comparing a bicycle to a car.

A young boy in Germany gets lost deep in the forest. While grieving for the loss of his mother, he starts to summon imaginary friends. One of them drags and lures him out to somewhere he is not supposed to be.

It’s an interesting concept that shows horror in VR from an entirely different angle. Games and movies aren’t really intertwined as often, so seeing something like that in 3D view is an experience for sure. In the beginning, you’ll mostly be watching a movie, but once the story is starting to get a basic shape, you get to be a protagonist. The protagonist is an explorer who is exploring the disappearance of this kid.

What’s interesting is that that the place that was filmed was also photo scanned, alongside actors and then ported into the game. So everything you see in the movie is basically fully interactive once you are in that world.

It sounds creepy, and it will be. This game is quite recent and many suggested it in 2019, so you might want to check it out here.

Doom series is completely on the other side of the horror spectrum. There are scary VR games that rely on you losing your clean pants by jump scaring you, and then there are the ones that go the gory route and make everything messy, eery and terrifying.

You want a shooter based horror game. This one is it. For some, it’s one of the best VR games there are, even though it’s not even built for VR. It’s actually using a mod that allows us to use it with Vive and Rift.

There is a VR version called Doom VFR, but it wasn’t really a good game at launch, and people gravitated towards the modded version. Currently, the VFR version has received many updates, but even with that I still recommend the modded version just because it feels more intuitive and is a bit scarier. By the time you read this, the scales might have dipped to the other side, so I recommend checking it out yourself.

If you are still going for Doom 3 BFG, then start with this Steam page. It explains what you have to do and what mods are the best for it.

If you loved Silent Hills, you are going to love this one. Inspired by one of the most popular horror franchise, it truly delivers you a scary experience.

Although the game itself doesn’t really have incredible graphics, it more than makes up for it in the atmospheric feel.

It truly terrifies you to play it. You’ll have to solve puzzles, find a way to save resources and bullets, and fight your way to victory.

This game has been mentioned by many users around the world as one of the hidden gems, and I truly recommend you to check Organ Quarter out!

As a professional VR blogger, I am not ashamed to say that I almost peed myself playing it.

It’s an all-time VR classic that has been with us since the beginning of Oculus Rift.

What do you do in this game?

Find a way out of Dreadhalls. You basically spawn in one creepy location somewhere underground and your only mission is to find a way out of this hell-hole. It’s literally a hell-hole considering that the monsters you will most likely encounter are quite demonic.

My favorite (scariest) creature was one of the statues that followed you around. What’s creepy is that you never see it following you. You just need to turn around and you see that it either has rotated towards you or moved.

Playing it on a flat monitor is scary enough, but when everything is scaled 1 to 1, and everything around you is in complete darkness because of Oculus Rift headset, you may literally and accidentally throw your headset out the window.

Well, you might think ‘now hold on a second, that’s not scary’,… but it actually is. Especially for those who have thalassophobia, also know as a huge fear of oceans.

Now, swimming under the water may not be scary by itself, but when you go down in the deepest parts… that’s when the fun starts.

It might be known and seen as a fun survival/exploration game, but when you put on the headset, it twists and turns into a creepy atmospheric monster (that is obviously still fun to play and explore).

You can check out Subnautica here:

There are many games out there that are made for VR and are truly awesome. But there aren’t many that are actually for PC and are exported to VR so cleanly.

Everything, from the frame rate to graphics to storytelling, really sends you to another world that can’t be described and is only understandable when you play it yourself.

The vanilla game itself is good and all, but there is a mod called motherVR that perfects it even more.

In all my VR reviewing years, I’ve never seen and read as much praise as this game and mod combo.

This horror game is available on Steam, and there is a discount where you can get it for 10 bucks only. If you are on the edge, go for it!

This one got a lot of praise in a short amount of time. In virtual reality, graphics don’t have to be in the lead for you to enjoy it. With this game, the narrative will carry itself for 8 hours so well, that you will start wishing about making your own Oculus Rift game.

Wilson’s Heart is very spooky and the atmosphere is ideally built. I would wish that many other developers would take notes from them and implement it in their games.

As with Organ Quarter, you will face a lot of puzzles that will punish you if you don’t solve them. Don’t worry though, if puzzles aren’t your favorite things in games, you will encounter a lot of battles to keep your adrenaline going.

Out of all the horror games, I find ‘Face Your Fears‘ one of the most terrifying experiences. Others aren’t bad also, but they aren’t as ‘in your face’ from the get-go. You will immediately know why this game is so horrifying and why it was so popular on Oculus Go.

I do, however, have to warn you that this game is in the category of ‘Dangerous’ because of some jump scares that you may encounter. When something jumps at you, be absolutely sure that you are firmly rooted on the ground and that there are no sharp objects to hit your head against.

A lot of horror games do not go as far as include these kinds of scenes because they know that oftentimes the atmosphere and scenery is scary by itself, so when you crank it up a notch and include jump scares to Virtual reality, that’s when you are in danger.

You will take a step back in this game, trust me on that.

I do not want you to go and buy a PS VR headset, because frankly, it’s the only hardware that has the official support for this game, but what you can do is get a taste for it through a program called vorpX.

VorpX injects itself into a game file and makes any game an Oculus Rift friendly just by clicking a few buttons. More about Resident Evil 7 and vorpx here.

For those of you who haven’t heard of Resident Evil 7 game, don’t spoil yourself anymore… it’s one of the scariest games out there. I have played the PC version back when it came out, and it truly was horrific. With Oculus Rift, the feeling as if you are in a haunted and screwed up place will mess with you in a deep level.

You will have to hide and look around, get through unnoticed, and shoot, and solve mysteries, talk, and everything you expect from a triple-A game – all that within VR.

These ones were suggested to me by many people and are truly worth getting. If you have any more suggestions for Oculus Rift horror games, please leave it down in the comments!