Tried Out VR Boxing For 8 Hours – Here’s My Opinion!

VR boxing is something that many have had thought of as soon as they heard controls are available in virtual reality. But the question arises – is it as good in practice as it is in theory?

I have done stand-up fighting in my own personal life for some time now, and boxing is something I am truly interested in. Getting to combine my own mixed martial arts hobby with my internet work is actually really fun, and in order for me to do it, I had to buy the only VR boxing game there is – The Thrill of the Fight.

The Thrill of the Fight is only available on HTC Vive due to being tied to tracking controllers, but I believe that the support will spread to Oculus Rift as soon as Touch controllers come out. 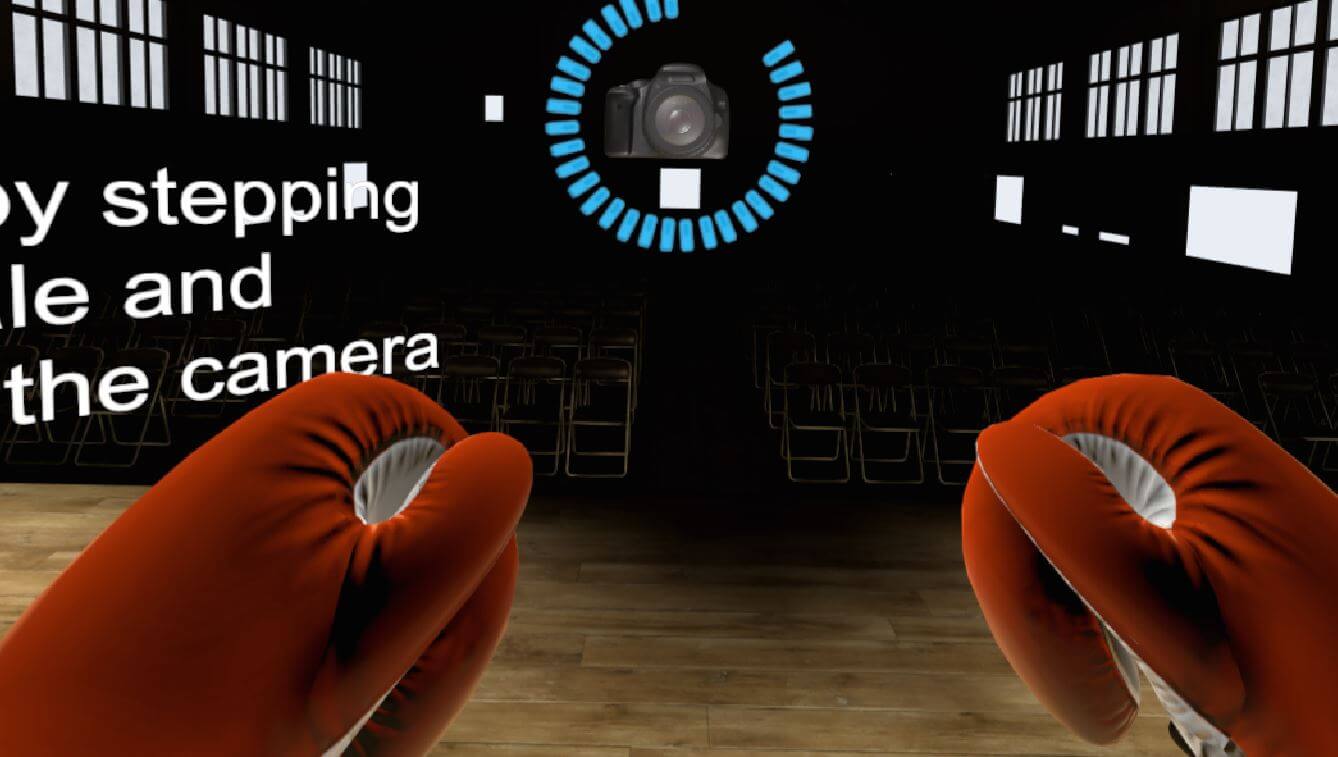 As soon as I turned on the game, I was up on stage, with no people sitting on seats. The only thing I had to do there was stand on weighing scale and measure my height (height being the only purpose of course). After that, I was suddenly teleported to a boxing gym, with my personal trainer just inches from my face, looking as though he had enough of my crap already.

When I looked around with my boxing cloves equipped, all I saw was a boxing ring and a clipboard with certain opponents on it (the more you win, the more you unlock). Obviously the first thing I did was try to knock out the trainer. Small punches in the stomach in the beginning, and then full-out swing-war on him after seeing he doesn’t go down. Be honest, if you didn’t beat him just a bit, you are one lying sack of potatoes. 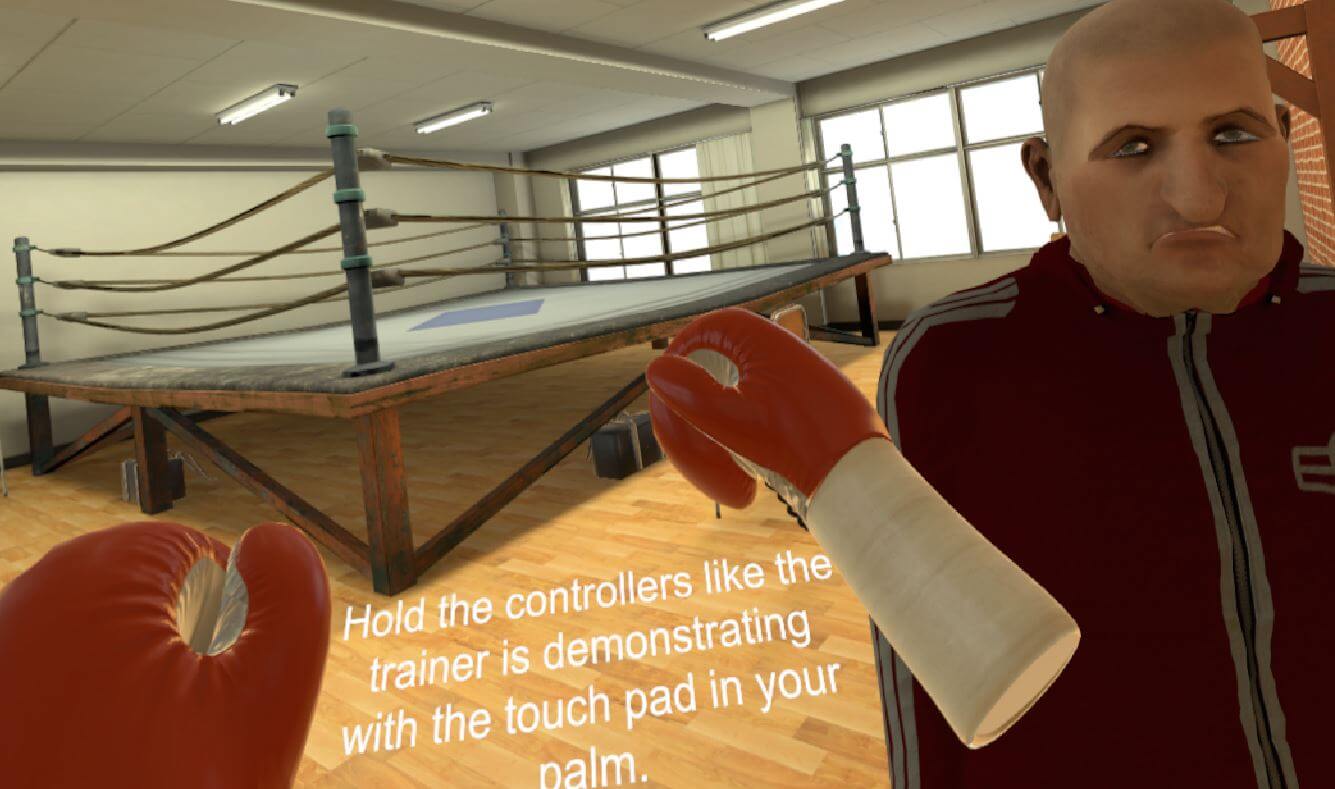 Even though I tried my best to combo K.O him, I had to give up after seeing that subtle ouch-faces were the only things I’d see from him.

But, once I started boxing in the ring, I gotta admit – it was super fun. Even though “fun” is not exactly the term most boxers would search for in this game, the fact that it manages to engage you to turn on your brain and look for the right opportunities to jab or counterpunch your opponent, makes this game ideal for people who want to practice their punches, and most of all, your reactions.

Being reaction based is actually why I am so excited for this game. I’ve done shadow boxing for some time now, but after playing The Thrill of the Fight in virtual reality, I have officially replaced my daily shadow boxing routine with this game. Pretty much all the things that happen in sparring, happen in this game also – you get tired, your hands lower, you get careless with your movement and you get hit out of nowhere. All these things are what sold me. That is what you need when you are back at your home, training for your next boxing session.

Obviously, it’s not “that good” of a replacement for real sparring that you can completely skip it, but the fact that it comes so close, truly convinces me that a new era of learning is upon us.

What Are The Disadvantages?

There are a few small issues that hinder your VR boxing experience. One of them is controllers. I can’t even count on my hands how many times I’ve hit controllers together accidentally. Sometimes you’ll be in a situation where you want to down someone quick and you start throwing combos. These combos have to be really specific, or your controllers are bound to hit each other. That will obviously draw your focus away from the game, and in the end might result in you getting K.O’d from your opponent. 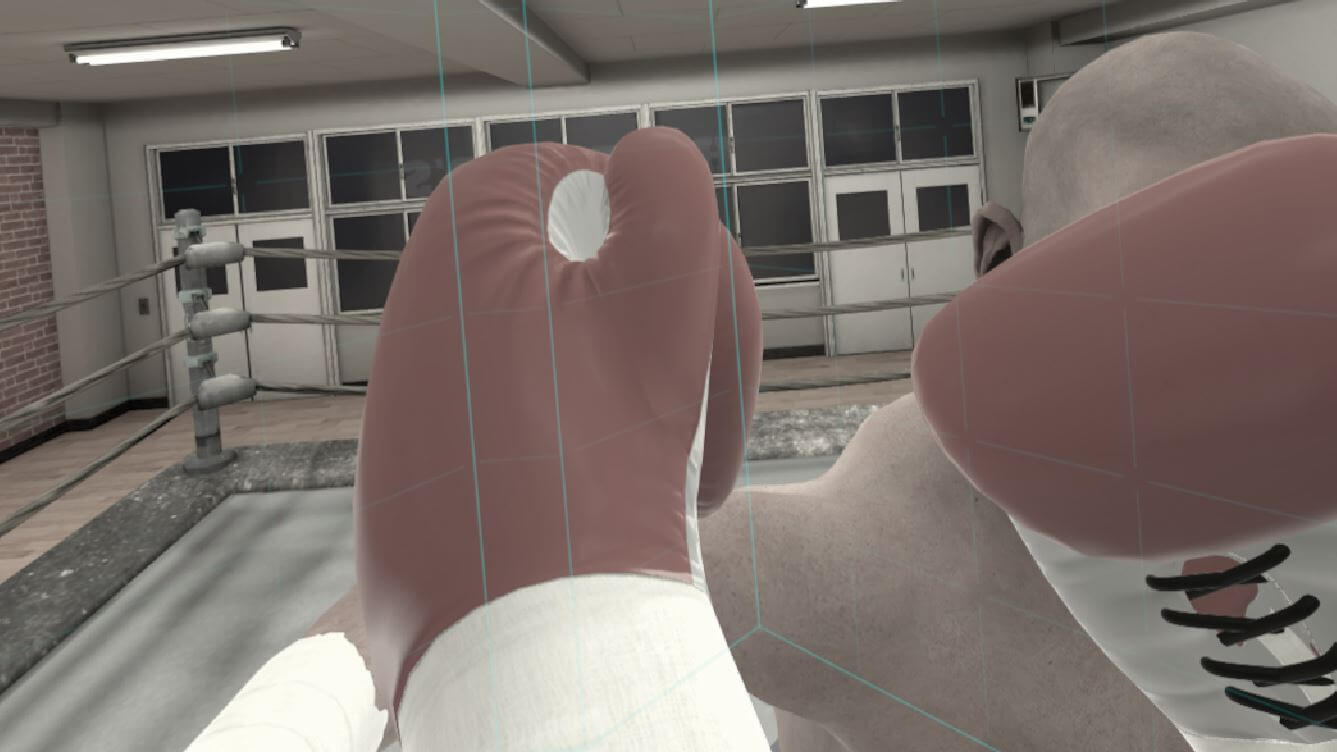 This issue also happens when you try to block a punch. Punches from opponents can be super fast – depending on who your opponent is – and when you draw your hands quickly close to your face, you accidentally hit your VR headset with controllers. I don’t think you’ll break your VR equipment that way, but after many hours of playing it, I still cringe whenever it happens and try to avoid it. But, the issue is, when I try to avoid it, my movement is more careful and slower, leading in unnecessary punches that dude below. 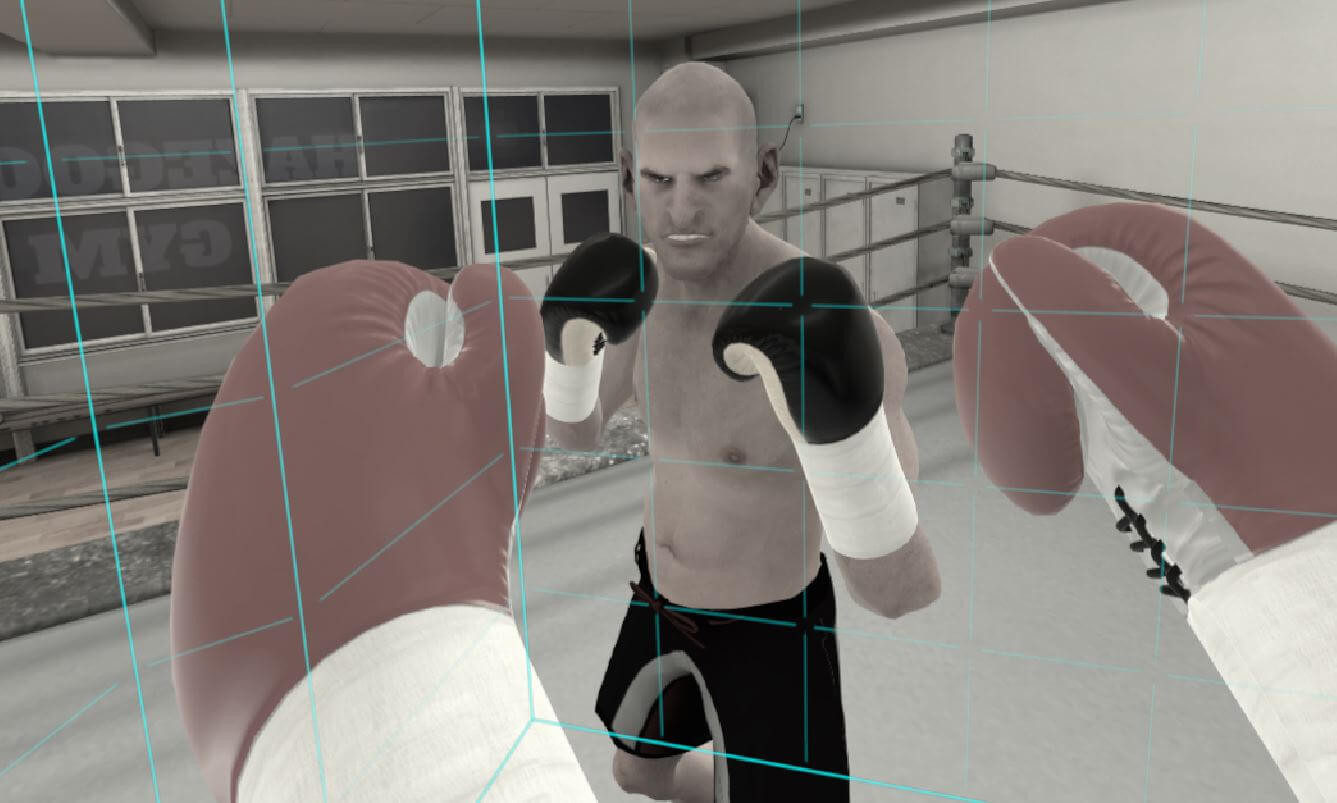 While we are at breaking department, make SURE you have enough space to move around a bit, and DO NOT have walls as a measure of your play room. You can obviously see the blue line when you approach the end, but it’s ridiculous even, how many times I’ve ignored the lines and stepped through them. If you go through the chaperone line in a VR boxing game, some really bad things might happen. First, you might break your VR controllers. Second, you might injure your hands. When you are THAT immersed and focused in the ring, you might accidentally forget to be careful and hit the wall. After all, your eyes are blocked by a huge VR mask.

Other than that, there aren’t many issues with the game. Maybe a few small issues like some hits or blocks not registering, but it seems like with each update, this VR boxing game keeps getting better and better.

The issues mentioned above are not really in control of the developer, but what is his hands, is making the game as responsive to you as possible, and making sure you are getting constant updates.

Luckily, Ian Fitz – developer of TTOF – is keeping this compartment healthy. In the early stages, there was only one opponent, and it was complained about in user reviews, but as time went on, different opponent were added, starting from aspiring Sage Northcutt lookalikes in terms of hair, and ending with opponents like Ugly Joe, who is so ugly he makes onions cry.

Speaking of opponents, you don’t have to fight humans. I am writing this article on a Halloween month, and guess what opponents came with that? A random pumpkinhead and a zombie who sometimes gives up on using his hands, and starts using his mouth to injure you….

That’s when you really wished you had more play room to back up. 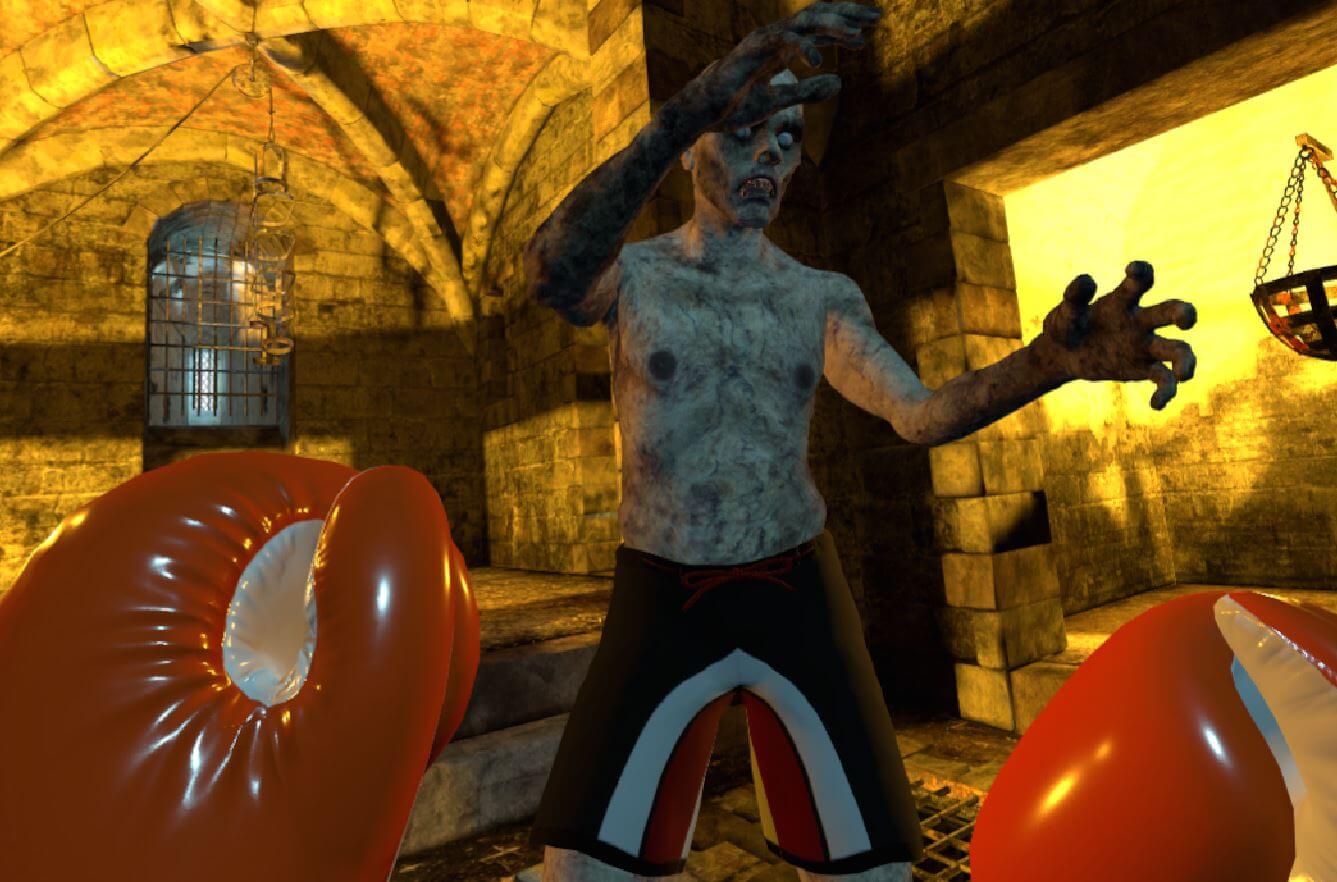 The Thrill of the Fight is one of my favorite applications right now due to being able to combine Vive with my fighting passion, and the fact that I can work on my cardio and reflexes in turn, makes it my daily go-to apps.

If you are thinking of giving this game a try, don’t shy away from it. You don’t have to be a fighter to have fun with this game, but if you do want to enhance your boxing capabilities, there is no other program that gives you that, apart from the real thing. I’ll be using The Thrill of the Fight regularly now, and will keep you updated on how it affects my stand-up game in the gym. Stay tuned.

If you want more VR related articles, make sure to sub to Rift Info. 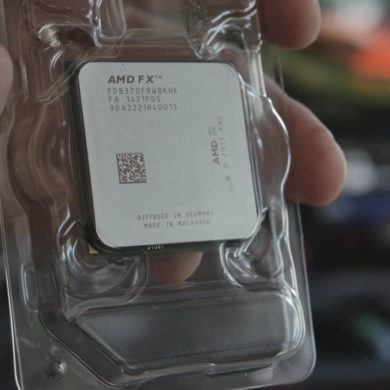