What is an Oculus Quest? NEWBIE Guide of 2019

What is an Oculus Quest?

Oculus Quest is a portable virtual reality headset that made big news in the beginning of 2019. The big emphasis with Quest headset goes on the word “portable”. 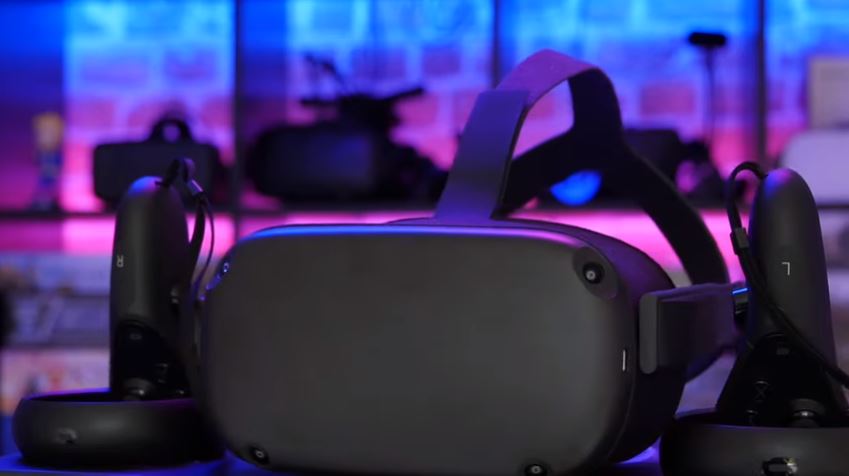 You can take it with you without the need to connect it to a computer, and there are no external sensors that you need to install inside your room (unlike with Oculus Rift or HTC Vive).

That basically makes it a pick-and-go device, everything is extremely simple, and the usage is as difficult as any other phone on the market.

With Oculus Quest, you will be able to watch 3D movies in a 3D environment, play games as if you are literally inside the game with a scale 1 to 1, and enjoy whole bag of other content that developers put their mind to.

Since it’s a fairly new technology, creators of content can be looked at as Santa Clauses, as each year there is something new and innovative created.

How Powerful is Oculus Quest?

But with the ones we have, we can say that it falls right under Oculus Rift, but has more power that Oculus Go.

Compared to Oculus Go, I don’t mean more powerful in terms of sheer power because in the end they share the same processing architecture. However, it has more functions compared to Go. These functions are hardware controlled IPD adjuster, support for 6-DOF tracking (can move your head in 3D space unlike just rotating), and better screen.

It’s basically a direct upgrade to Oculus Go. That, obviously, makes the price a bit crispier.

Compared to Oculus Rift, it falls in terms of raw power. Obviously, the mobile chips cannot compete with devices that are directly connected to the mighty PC. But since Oculus Quest is highly optimized for VR usage, it comes pretty close. Taking into consideration facts like no sensor requirement and no cable requirement, many see Quest as an upgrade instead.

That can be enforced with the fact that the screen resolution is a lot better on the new Oculus device, and the God Rays, something that VR users absolutely hate, is almost non-existent. That makes Oculus Quest a perfect movie watching device. Many use it for media consuming only, and that is perfectly fine. If you plan to be one of them, go for it.

Best Way to Use Oculus Quest

Obviously, the entertainment is its main job. But, there are many different branches to entertainment that range from active gameplay to passive movie watching.

For me, personally, it’s split right down the middle. I do use Oculus Quest for games, and it super good for it. In some ways, I even prefer it to Rift due to lack of cables and ease of use. I truly love the last one. The fact that I can take it anywhere I want and I won’t have to worry about dragging a computer with me, makes it ideal for many of my VR projects.

But, the games don’t take all my time in it. It is actually a super good media consumer. I can watch Youtube, Netflix, any movie or TV series I want through a screen that is far superior to Rift in terms of screen clarity and sharpness. Rift is tad more focused on games and the small text suffers because of it.

That is why I use Quest in a variety of ways, just like it was means to be. Compared to other VR devices, I’d say that Oculus Quest is the most mass-consumer ready out of all the others. I am interested to see how it grows.

Where Can You Order Oculus Quest?

There are many places you can get one. Currently, Oculus is a bit loaded with orders, but they seem to be dealing with it just fine. Nothing compared to initial Oculus Rift launch, at least.

Amazon is a great place to purchase one. You are probably well familiar with it, and since it is one of the biggest retail shops in the world, the trust is enormous with it. You can rely on them to bring your VR device safely, and on time. For some, the shipping time is quickest of all the options.

BestBuy is known for electronic devices and quite often offers one of the cheapest prices there are. Although Oculus Quest is sold at a fixed price, you can still rely on them to bring your new headset without issues.

I’ve bought many things from them, and although customer support wasn’t the fastest (asked regarding shipping), I didn’t run into any issues.

Get on Best Buy

All in all, when all the shipping and tariffs are taken into consideration, the price is more or less the same on their site.

Many decide not to order from there since they are not familiar with their way of making transactions, but in the end, there is nothing difficult. If you will run into issues, customer support of Oculus is quite fast and will respond and help with customers in mind.

Unless they are having a campaign, chances are that they will overprice it a bit, just to get more profit. The difference won’t be huge, but it’s there nonetheless. On top of that, there is no telling when they will get it. It may take weeks, and it may take months.

At least if you buy it, you get it immediately. That is only if you are lucky enough to see it on a shelf.

As a vivid VR fan and having years of experience, you can ask me anything you want and I’ll give you tips to the best of my abilities. Just write down the question don below and I’ll answer as soon as possible.

Oculus Quest is fairly new, so I’ll be posting more random articles on it over time. Stay tuned!