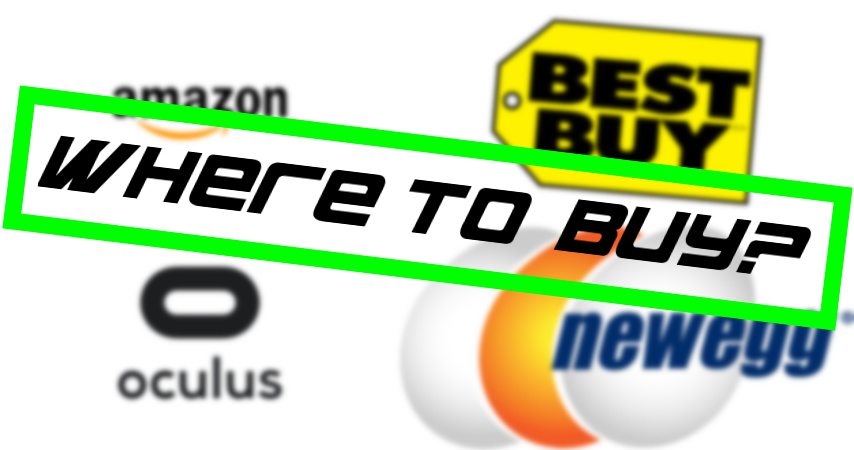 Where Can You Buy Oculus Rift? Best Offers Here:

Looking for where you can buy Oculus Rift? Want to get your VR headset INSTANTLY without waiting for a long time?

It’s dangerous to order things from the internet without knowing exactly what the site is. I’ve had quite a few instances where I ordered one thing, and got another. Their trick for me was to take a picture of that product, and then send the picture…

If the site you are visiting doesn’t have a “return” option with getting your money back, don’t use it. It’s just not worth it.

These are the sites that are trustworthy, have a huge number of reviews, and can be safe for everyday shopping:

Amazon in number 1 for one reason. It’s number one in retail. Simple as that. Literally every company places their products within Amazon. Reason?

It’s just too popular. It is popular because people trust it, and since people trust it, they visit it more and more. Others see the trust, and go to that site. It’s just an upwards spiral that made Amazon the BEST place to buy things. It always keeps their prices low, and ships them fast and carefully.

If I buy something from online, it is usually through Amazon, so if you want to buy Oculus Rift, my first recommendation would be Amazon.

Microsoft… well, it’s also given to us as an option.

Update: Apparently Oculus Rift is out of stock here!

You can buy  Rift for $499. I don’t know why the $399 version is not on the first place. When you click “Save $199” it sends you to a page where you apparently can get a bundle for $99. I am not really sure what is going on there, but apparently they messed up with the price tags along the line.

Is Microsoft site a good place to buy Oculus Rift? Personally I wouldn’t use it. Considering how messed up the information is laid out for us, I wouldn’t trust them to ship such things, even though Microsoft is a big brand. Also, reviews for Microsoft Store aren’t the best either.

Now that is something more trustworthy compared the previous one. Everyone who has bought some kind of a tech product knows about Newegg. They only sell technology related products. So it’s a surprise that Oculus Rift can be bought from there also.

If you want to compare Newegg to Amazon, then both of them have a great customer support. In terms of returns, I’d say it’s easier with Amazon. They have never disappointed people with that, and you’ll know that you are going to get your money back with 100% guarantee if it turns out that Oculus Rift has a defect.

But other than that, completely safe to use Newegg for purchases also.

As with Newegg, Best Buy is listed as a go-to place for purchases. These 3 giant retail shops are the only ones at the top, and each and every one of them is trying to out-best the other. The only difference can be in price and customer support, so if you want to buy something, check the prices for them.

Oculus Rift, at the moment, is available and at the same price as everywhere else on Best Buy. So I’m giving thumbs up to those who want to buy Oculus Rift from here.

Just make sure you are getting the right version of Oculus Rift, as there are $499 still in the open, and $399 one.

You might think that Oculus Store is the best place to order “Oculus” Rift, right? After all, they are the source of these products.

Well, I wouldn’t be so sure. Every single retail site that we mentioned might have the same problems like “out of stock” or sending broken products. But the issue with Oculus Store is, their return policy is a bit crappy.

If you find that your Oculus Rift is damaged in any way and you ordered it from Amazon for example, then you will experience no problems with sending it back and getting a new one. With this store, however, they will not only review your ticket, but will take a long time in doing so. Reddit was raising that issue also.

If you are from US, I’d recommend you to buy Oculus Rift from Amazon. Other huge retail sites like Newegg and Best Buy are also good, just make sure that you are buying the right version. Microsoft Store and Oculus Store I would avoid. If you are from Europe, Amazon is the way to go. Oculus Store is also bearable, as long as your country is listed in the following countries.

It’s 2017 now, so quite many of them should be listed. I remember when we had to order to our country last year. Through 4 countries did our VR headset had to travel to get to us. There were no direct routes.

So now, all you have to do is to check the price, and wait for few days for this awesome headset to come to you!