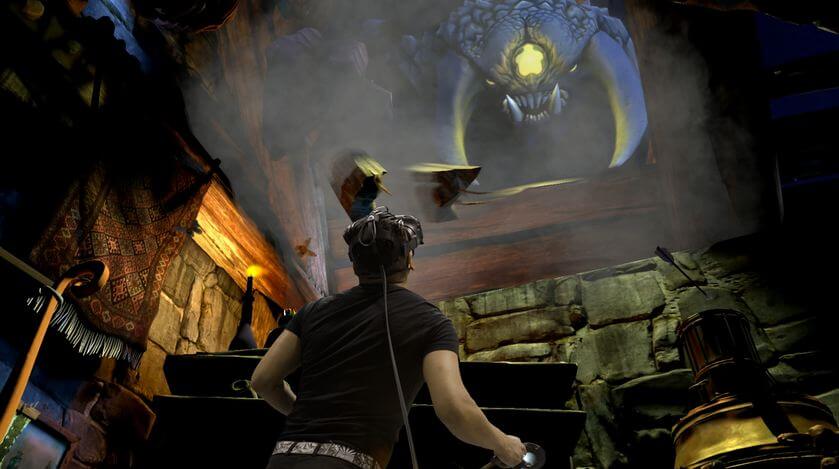 Why is HTC Vive’s ‘The Lab’ so Freaking Popular!

It’s been well over a year now that HTC Vive has been out. That means that ‘The Lab’, one of the most popular applications for HTC Vive, survived the initial release. That can be seen when we look at how popular it is despite its ‘lack of content‘.

By that i don’t mean it’s boring, or does lack entertainment. After all, you can play there for hours and not get bored. No, I mean how simplistic and ‘arcade-ish’ it is all things considered.

We got our HTC Vive headset somewhere in August 2016, and from the moment we tried ‘The Lab’, we were hooked. But what was the selling point for us?

In ‘The Lab’ there are around 10 little mini-games. You spawn at a huge warehouse looking room where you can see different doors, boxes, items and a dog. Whatever item you throw in that warehouse, futuristic robot dog will go and fetch that for you. Heck, you can even scratch him and he will roll around on the floor expecting you to do more of it. Every single woman who tried it at our office was playing around with a dog way too much.

Mini-games can be activated once you grab one of the floating spheres next to appropriately themed corner or box, and move it to your head. From the top of my head, I can say there are mini-games ranging from just spectating to using your controllers to either shoot, aim, grab or move.

One of those mini-games features a low poly archery game where your goal is to protect the gate from cute little fat stick-figure looking creatures that make such cute noises that you almost feel bad shooting at them. They come in waves and each wave is harder and faster than the other.

I have literally spent hours on that mini-game alone. After trying out other archery games that came out on Steam, I still haven’t found a game that mimics its feel and ease of use to real life as well as ‘The Lab’. Not only it feels great, but it looks great despite its simplistic low poly inspired look.

It’s not actually that surprising considering that Valve made that application. Valve is a co-founder of HTC Vive. Their knowledge of its headset and VR in general is miles ahead of typical indie developer on the market.

Luckily, Valve made their game quite open for others to use, which means that some of the assets (game files) can be downloaded and used in your own game. All you have to do is install Unity and then import a specific pack that has necessary prefabs. We have used it for our game (learn more soon) and we learned a lot from them. 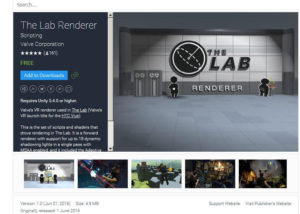 Not only that, they released ‘Lab Renderer’, which basically allows your game to have good looking shadows that are quite VR optimized. Sadly it hasn’t worked with every VR project that we created so I hope they keep updating it and keep getting rid of bugs. Otherwise I am extremely grateful of them being so open-source minded.

If you turn on the archery game, you can see a huge leaderboard behind you that is updated regularly. I thought I was pretty good, managing to get to 32-nd wave, but when I looked behind I saw that around 32,000 people were better than me. Needless to say it ignited fire in me, making me want to play it more and more to beat my previous record.

I am a huge fan of online games, and I truly believe that VR can be a great successor to future competitive games. You are no longer bound to key and mouse, which in turn gives us more of a learning curve. Imagine the future where if want to compete in e-sports, being fit is important. Even playing archery games lets you know in the shoulders that you can’t keep up the same pace as you do in your first 20 waves. Eventually you take bigger and longer breaks and they keep coming more and more. So for me, it’s not only entertaining to play, but it kinda trains your muscles a certain way – and as a big advocate for sports, gaming and physical movement is a dream come true. 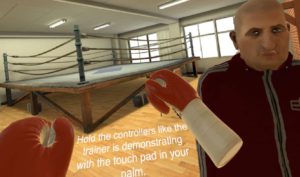 I would say that there are better VR games that are focused on fitness though. For example, game called “The Thrill of the Fight” is pretty cardio intensive. I was playing that game for months every day for half an hour to an hour, and at the end you really felt as if you ran 5 miles. That is, of course, if you play it with moving around a lot. Even in ‘The Lab’ you can put more pressure on you by never lowering your hands or torching your arrows for every shot. That is one of the reasons I love VR so much!

All in all, I definitely recommend this game to everyone. It’s one of the most well polished titles on Steam, and everyone can enjoy it ranging from family members, guests or even hardcore gamers. It has everything to please a wide variety of personalities. It can even be played on Oculus Rift, even though the makers of The Lab are Valve and Valve is co-founder of HTC Vive. In terms of cross-availability, HTC and Valve are much more loose and don’t create headset exclusive games unlike Rift. That is one of the things I truly appreciate about Vive. Be aware though that come buttons and input settings won’t be a comfortable for Rift users as it is for Vive users.